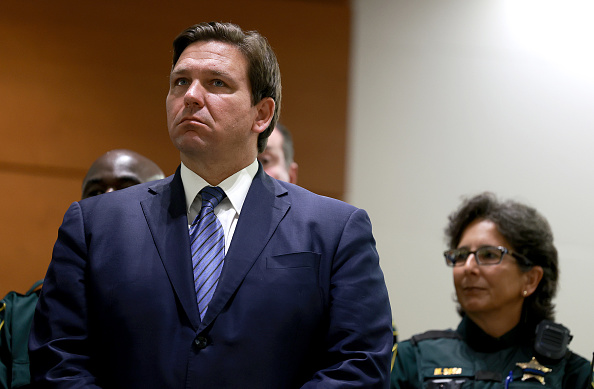 Prosecutors have dropped charges against a Florida man who was arrested in August for allegedly voting illegally, according to local reports.

Tampa resident Tony Patterson was one of 20 people accused of voting illegally in the 2020 election by Republican Governor Ron DeSantis. The individuals were arrested back in August by the Florida Office of Election Crimes and Security, a division formed within Florida’s Department of State to investigate supposed election malfeasance, and one that has been widely criticized as a political stunt on DeSantis’ part as the governor courts MAGA voters and flirts with 2024 ambitions.

DeSantis launched the office ahead of the midterms this summer and several years after Florida voters re-established voting rights for formerly incarcerated residents, excluding those who’ve committed sex crimes or murder, by amending the state constitution in 2018. Republican lawmakers quickly moved to clamp down on the measure, passing a bill requiring felons to repay court debts before they can vote again, a move that advocates likened to a poll tax, in 2019. A federal judge deemed it constitutional in 2020.

Turns out that the main threat to election integrity in Florida was bureaucratic disorganization: During the 2020 election, almost two dozen formerly incarcerated Floridians who were excluded from the constitutional amendment were allowed to vote simply because they thought they could and no election officials stopped them.

Patterson was one of them. He was arrested on Aug. 18 for voting despite being convicted of a felony sexual offense. He was allegedly still granted a voter ID card by state elections officials and allowed to cast a vote in the 2020 election.

His arrest was caught on video by a body camera worn by the police, and went viral back in October.

“Why would you let me vote if I wasn’t able to vote?” he asked an officer in the video.

Patterson was facing up to five years in prison per charge if he was convicted for both registering and voting illegally, but statewide prosecutors dropped the case on Monday when it came to light that he was being tried in a separate criminal case, according to local reports.

Patterson was sentenced to a year and a day in prison for failing to notify a local sheriff that he’d gotten a new vehicle back in March, the Tampa Bay Times reported. State law requires that registered sex offenders are required to report whether they’ve changed vehicles within 48 hours.

Patterson is the second of the 20 cases that have been dropped or dismissed so far. Back in October, Miami resident Robert Lee Wood had his case dismissed because a state court judge found that his alleged misconduct only took place in Miami, so it fell under the Miami-Dade state attorney’s jurisdiction, not the Office of the Statewide Prosecutor which was overseeing the case at the time.

So far, DeSantis hasn’t netted any convictions through his new office.

Correction: The original version of this post referred to an earlier ruling in a related case as coming from a federal judge. In fact, it was a state court judge. We regret the error.