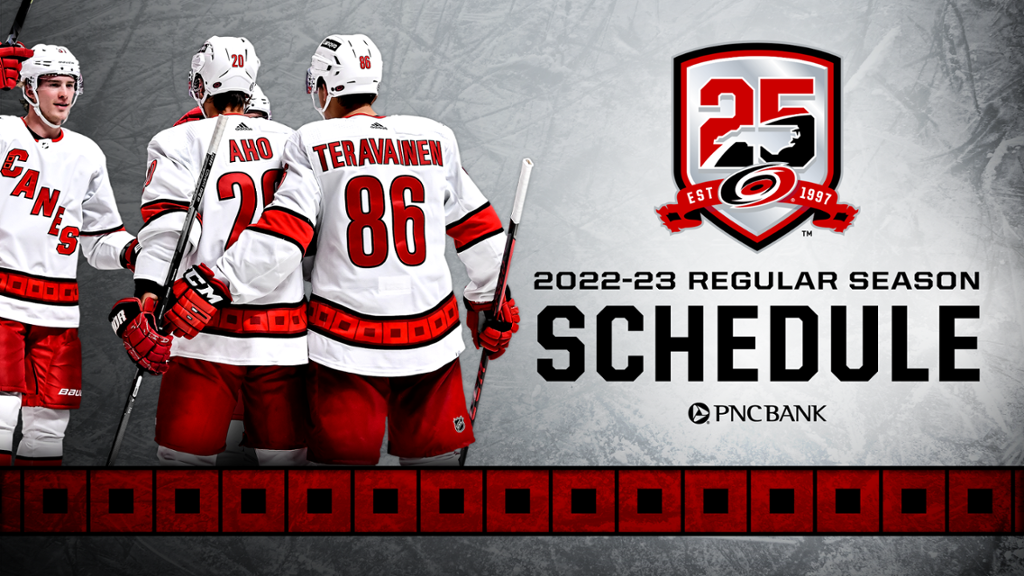 RALEIGH, N.C. – The National Hockey League today released the 2022-23 regular-season schedules for its 32 member clubs. The Carolina Hurricanes will open the season against the Columbus Blue Jackets on Wednesday, Oct. 12 at PNC Arena.

Some features of the Hurricanes’ 2022-23 regular-season schedule:

OPENING AT HOME: The Hurricanes will begin the season at home for the fifth time in the last six seasons. Carolina opened the 2021-22 regular season with a 6-3 win against the New York Islanders at PNC Arena.

CATCH ME OUTSIDE: The Hurricanes will play their first-ever outdoor game at Carter-Finley Stadium in Raleigh at 8 p.m. on Feb. 18 when they host the Washington Capitals in the 2023 Navy Federal Credit Union NHL Stadium Series™. The contest will mark the 13th NHL Stadium Series game and the 37th regular-season outdoor game overall.

TAKING ON THE CHAMPS: Carolina will square off against the defending Stanley Cup Champion Colorado Avalanche twice this season. The Hurricanes will travel to Ball Arena on Saturday, Nov. 12, and the Avalanche will visit PNC Arena on Thursday, Nov. 17.

GOING BACK-TO-BACK: The Hurricanes will play 14 sets of back-to-back games for the second consecutive season.