“Build Back Better” Is an Awful Catchphrase 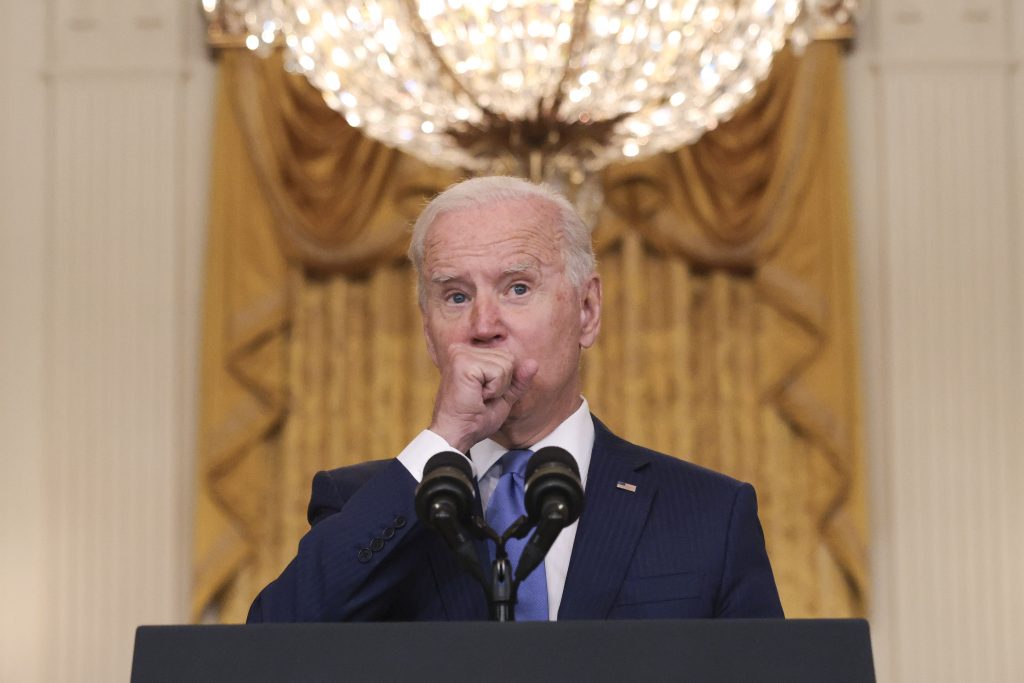 Late last week Joe Biden went
before TV cameras to deliver
a passionate appeal for tax fairness. “This is our moment to prove to the
American people that their government works for them—and not just for big
corporations and those at the top.” While he never directly made the
linkage, the president implied that those extra federal tax dollars could fund
aggressive action to battle climate change, major investments in health care, support for daycare and eldercare, expansion of preschool, tuition-free
community college, and the continuation of the Child Tax Credit.

This was not a State of the Union address, just a routine 20-minute talk at the White House. But the expansive vision
that Biden is promoting—as laudable as the individual parts are—overwhelmed the
format. The closest Biden came to expressing his overall rationale was his
closing words: “Let’s look forward together as one America. Not to build
back, but to build back better.”

Even in an era of emojis and TikToks,
words matter in politics. A good bill needs a good catchphrase. And one of the
biggest, if little-discussed, challenges Democrats face in the weeks ahead is
to explain, in easily comprehensible fashion, what they are trying to do in
Congress with their unprecedentedly ambitious spending bill.

Technically, the ever-shifting,
maybe $3.5 trillion plan is known as reconciliation, which is a congressional
term for catch-all budgetary legislation that can skirt a Senate filibuster.
But to most Americans, reconciliation refers to that moment when a clearly
doomed couple tries to get back together for one last time.

Ever since the presidential
campaign, Biden has been smitten with the slogan “Build Back
Better.” The White House refers to his plan as the “Build Back Better
Agenda.” And, undoubtedly, based on the constant repetition, there is
internal polling data suggesting that voters swoon every time they hear
“Build Back Better.” Color me skeptical, since I have always regarded
it as the worst Democratic slogan since Bill Clinton’s promise to “build a
bridge to the twenty-first century.”

But even if I’m wrong in my
aesthetic judgment, the actual phrasing of Build Back Better conjures up the
$1.2 trillion bipartisan infrastructure bill that is currently in congressional
limbo. As determined as Biden may be, it is illogical to use this tired catchphrase to describe the Democratic reconciliation bill with its trillions
devoted to climate change, health care, education, and expanding the social
safety net. Calling this “Build Back Better” is like describing a
12-course tasting menu with a wine pairing as breakfast.

Voters crave explanations—and right
now the Democrats, from Biden on down, are doing a mediocre job explaining an
overarching vision for what they hope to accomplish with the 13-digit
reconciliation bill. The problem for Democrats is that they have gulled
themselves into believing that because the individual parts of the package poll
well, the entire plan will be popular with voters in 2022.

Probably everyone aside from Joe
Manchin’s immediate family is beginning to find his constant TV appearances
dissenting from the Biden agenda a tad tedious. But like it or not, in a recent
CNN interview the West Virginia Democratic
senator asked a question that may resonate with voters: “What’s the
urgency and the need that we have?”

Manchin, along with everyone in
politics, knows the true answer to the “What’s the urgency?”
question. With Democrats quaking in mortal terror that they will lose control
of Congress in 2022, the reconciliation bill is seen as the last chance to fund
liberal priorities in this decade. In legislative terms, it’s the last train
out of Paris in 1940 with the Germans on the way.

But try selling a plan to voters as
the “Only Way Around Mitch McConnell for Years to Come Act.” Only on
Capitol Hill does it makes logical sense to combine in the same legislation a
climate change plan and a massive expansion of health care coverage.

In his speech on the economy, Biden
also made a strongly worded pitch for his vaccination mandates, which included
direct attacks on Florida Governor Ron DeSantis and Texas Governor Greg Abbott for
“doing everything they can to undermine the lifesaving requirements that
I’ve proposed.” But that presidential appeal also highlighted a potential
political weakness in the Democrats’ ambitious reconciliation plans. At a time
when Covid-19 and the delta variant dominate everything, it is hard to simply move
on to talking about spending $3.5 trillion for a vast array of programs that
have nothing to do with the pandemic.

This was, in part, Barack Obama’s political
problem with the Affordable Care Act in 2010. The landmark legislation squeaked
through Congress at a time when voters were still struggling to recover from the economic meltdown. At the
time, as I recall, Democratic pollsters found that voters in focus groups were
grumbling about Obama’s obsession with his political promises (passing health
care reform) rather than their current problems (lost jobs, foreclosed homes,
and other wiped-out assets).

The Affordable Care Act (an awkward
moniker that morphed into the term used by everyone, Obamacare) had another
glaring political weakness relevant to the current congressional struggle over
reconciliation. Most of the key provisions of
Obamacare phased in over four years, which meant that the material changes the
law would eventually make to improve the health care system were still abstractions
for most voters in the 2010 elections. While the details of the reconciliation
package are in constant flux, the odds seem high that implementation of many of
the new programs will also be delayed until after the 2022 election, both to
reduce the overall cost of the package and because federal rules and
regulations will need to be written.

Since Democrats assume that reconciliation
is the last big legislative moment of the Biden presidency, the infighting over
what provisions actually make it into the bill is growing increasingly nasty. The
defection last week of three skittish House Democratic moderates on a
committee vote to allow Medicare to negotiate drug prices was a symbolic blow
to party unity. The Wall Street Journal, playing the “Democrats in
disarray” card, headlined its story on the committee vote:
“Drug-Prices Measure Splinters House Democrats.”

Each well-publicized Democratic
squabble over the contents of the bill carries the risk of antagonizing 2022
voters. It is not as if a large band of Americans is following every detail of
the congressional negotiations. But as the reconciliation package drags on into
the fall (and maybe later), voters can pick up a downwind whiff of the
sausage-making. This is not an abstract fear. Buyoffs to individual Democratic
legislators during the 2010 passage of the Affordable Care Act—whether it was
centrist Nebraska Senator Ben Nelson or anti-abortion Michigan Representative
Bart Stupak—created a sense of backstairs
dealmaking that partly poisoned public sentiment against Obamacare.

All these factors—Obama seemingly
ignoring economic distress, the long phase-in period, and congressional favor-trading—contributed
to the Democratic wipeout in the 2010 congressional elections. This was clear
from polls immediately following the passage of the Affordable Care Act in late
March 2010. An early-April Kaiser Health Tracking poll revealed that as many
voters believed that they would be “worse off” under the plan (32
percent) as “better off” (31 percent). A Washington Post/ABC
News poll in late April found voters evenly split over whether they approved of
the way that Barack Obama was handling health care. Even though health care is
a traditionally strong Democratic issue, 40 percent of the voters strongly
disapproved of Obama’s performance while only 29 percent strongly approved.

That was the Democrats’ initial political
reward for the biggest expansion in health care coverage since the passage of
Medicare in 1965.

Biden came into the White House
determined not to repeat Obama’s initial mistake in approving too meager a
stimulus package as the economy was reeling in early 2009 from the financial
meltdown. As a result, “Go Big” has become the mantra of the Biden
presidency, starting with his $1.9 trillion spending bill to jump-start the
Covid-plagued economy that Congress approved back in March.

Voters in times of trouble
certainly understand the need for economic stimulus. And after four years of
comically empty talk about Infrastructure Week in the Donald Trump White House,
they likely also appreciate the need to rebuild the nation’s roads and bridges.

But what Biden and the
congressional Democrats are doing now with reconciliation is not nearly as
easily grasped by someone who isn’t watching MSNBC 12 hours a day and reading
every bulletin from Capitol Hill. Yes, the nation has more than $3.5 trillion
in unmet needs and problems swept under the rug for too long. But the Democrats
are behaving as if this is all intuitively obvious—and that few explanations of
an overall strategy are needed.

In politics, virtue is not its own
reward. Even the virtuous need a compelling message.