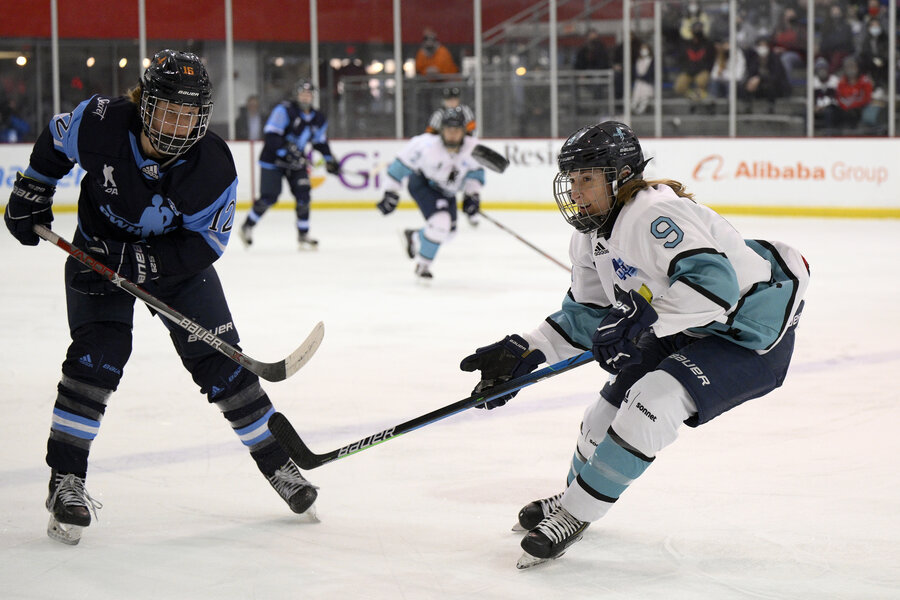 Megan Grenon stretched outside the rink before a rare showcase of women’s hockey in the Washington, D.C, area when a young girl approached with her parents.

“Are you a hockey player? Are you playing today?” the girl asked.

Ms. Grenon plays for Calgary with the Professional Women’s Hockey Players Association, which has set a goal of establishing a sustainable professional league in North America after years without one. Ms. Grenon said she would be wearing No. 5 in white that day, and the young girl jumped up and down in excitement.

Scenes like that are playing out more often across the country since the U.S. women’s national team won gold at the 2018 Olympics and generated more exposure for the sport. There will be NHL playoff hockey starting next week in Dallas, Tampa, Nashville, Raleigh, and Washington, D.C., where girls hockey has expanded over the past decade but still lags far behind traditional hotbeds like Massachusetts, Minnesota, Wisconsin, and Michigan.

Because of logistical hurdles, from a shortage of rinks and ice time to a lack of college and varsity high school programs and the need for more education, growing girls hockey in nontraditional markets remains a challenge. The 3,177 female players aged 18 and younger registered by USA Hockey in Texas, Florida, Tennessee, North Carolina, Maryland, Virginia, and the District of Columbia combined is still fewer than in Wisconsin alone.

“It’s been like a slow buildup,” said Kush Sidhu, director and under-19 college prep team coach for the only top-tier junior women’s hockey team in the Washington area. “It’s always hard. It’s a struggle, I guess, but it’s a good struggle and we’re happy to do our part.”

The NHL’s Dallas Stars, Tampa Bay Lightning, Carolina Hurricanes, Nashville Predators, and Washington Capitals are also trying to do their part to get participation numbers up in those areas – and similar efforts are taking place in Arizona and elsewhere around the league. The number of girls playing hockey in those states is up 71.3% from 2011 to 2021.

USA Hockey regional manager of female hockey Kristen Wright, who spent five years as manager of girls player development, is proud of the sport’s rapid growth at the youth level in nontraditional markets and thinks it can be even better with more exposure and ice time.

“Some of the challenges that come with that are female role models: Convincing girls that hockey is for them,” Ms. Wright said. “They need to see it. You really need to see different female hockey players, have female coaches, and have that engagement there. And the other challenge, I would say, in some of those markets, there just aren’t as many ice rinks, so now instead of it being a soccer field that’s attached to your middle school or your elementary school, where you learned to run and kick a ball, well, you need to go to an ice rink.”

“Where do we put new girls or new kids that want to play?” said Mr. Sidhu, who has coached girls and women’s hockey since the late 1980s and is director of the Washington Pride program in the D.C. area. “We’re pretty maxed out on all our ice time at every rink that we have, so that’s a bit of a challenge. When you compare us to other big metropolitan areas, we’re still pretty low, infrastructure-wise, on rinks.”

Getting girls to get on the ice is the first step, and in a lot of places it starts with ball or street hockey. The Stars, Capitals, and Hurricanes have all won the Stanley Cup, the Predators reached a final and the Lightning are back-to-back defending champions, and yet there can still be some hesitation for girls taking up hockey.

“I’ll go to schools and we’ll do ball hockey and stuff like that and so many girls are still so surprised that I actually played,” said Ms. Steadman, the Lightning’s hockey development ambassador who won two world championships with the U.S. and played in the Canadian Women’s Hockey League and National Women’s Hockey League that has since been renamed Premier Hockey Federation.

“They’ll be like: ‘Oh, did you play, too? The boys played, but do you play?’ So here we’re still kind of in that grassroots [level] for some of these girls, where they’re not even aware of what women’s hockey is.”

Hence the need for programs like Canes Girls Youth Hockey and All Caps All Her, launched by the Carolina Hurricanes and Washington Capitals, respectively, last year.

The Capitals have seen an influx of youth hockey since Alex Ovechkin became the face of the franchise in 2005 and ushered in an era of success culminating with the organization’s first championship in 2018. While Capitals VP of marketing Amanda Tischler said the “Ovechkin Effect” is real in boosting participation, the team needed to go further than the learn-to-play programs that were in place.

“What we were finding out is all these girls wanted to continue to play hockey,” Ms. Tischler said. “And there was this other age group of 10-14, which is why we recently launched an all-girls learn-to-play for that age group, as well as an all-female adult learn-to-skate and adult learn-to-play.”

Canes Girls Youth Hockey is similarly providing a pathway in North Carolina, where players can go into a development program and play in house leagues or at the junior level to stay in the game. There’s also an under-19 team that can keep girls around longer instead of forcing them to leave the area to go to prep school for hockey.

“It’s cool to see it go from basically nothing to we’ve got kids coming into the sport at 5-, 6-years old and now they could stay here all the way to going to play college hockey,” Ms. Gagliardi said.

A lack of high school varsity girls and college women’s hockey programs in nontraditional markets is also an issue. Given the lack of one major women’s pro league, like the WNBA or National Women’s Soccer League, colleges provide the most consistent action aside from the Olympics every four years and the annual world championship.

USA Hockey started a national high school tournament to prompt more growth at that level. Ms. Wright said college programs are going west to places like Arizona, Colorado, and Utah faster than they’re moving south, so more players are leaving home to stay on the ice and continue their advancement.

Ms. Bowness, whose father Rick coaches the Stars, has spent time with the Coyotes, Lightning, and now Predators and put a lot of time into growing hockey in nontraditional places. While in Tampa, she said there was a junior varsity team that had to play against the boys and points out there’s a need for more girls in the pipeline overall.

“Right now I think it’s more of a numbers thing,” Ms. Bowness said. “We just need more girls playing in order to get leagues up and running.”

Haley Skarupa, who grew up in Rockville, Maryland, and won gold with the U.S. at the 2018 Olympics knows all about a numbers game. After being the only girl on her team as a kid, she’s impressed by the options available in the Washington area.

“They’re not limited just to that option to play boys hockey,” said Ms. Skarupa, who played for the Pride and is now an ambassador for the Capitals. “They can be on their own team with other girls, and that’s just grown so much.”

The Olympics and events put on by the Professional Women’s Hockey Players Association, Premier Hockey Federation, USA Hockey, and the NHL are in place to spur more growth and yet, Ms. Wright said there are many pieces that need to come together on that front. Now, more than two decades since women’s hockey debuted at the Olympics in 1998, when college programs weren’t even in existence, generations of players are back in the community as role models and it could take years for the fruits of their efforts to take shape.

“Part of it is time,” Ms. Wright said. “We don’t like to talk about time, but some of it takes time.”