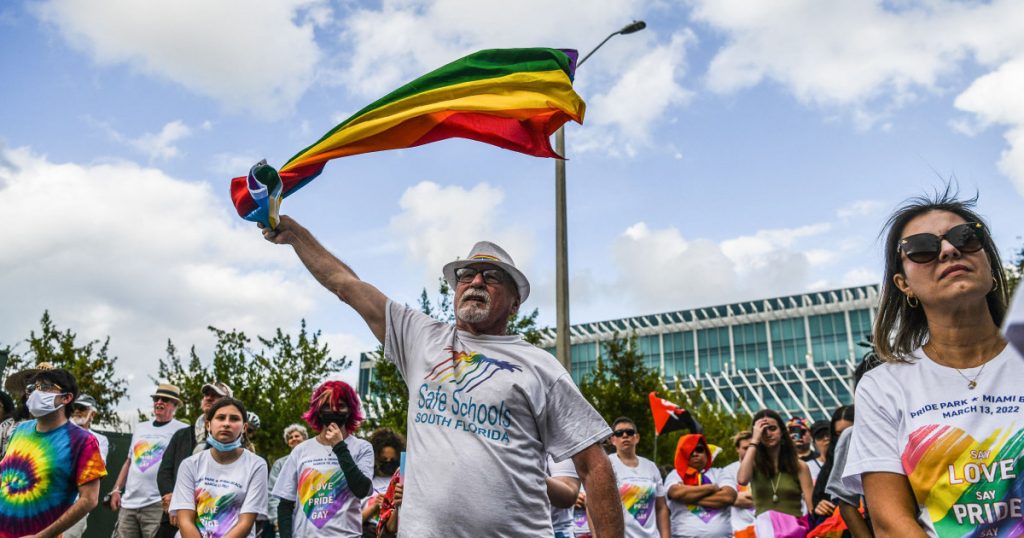 As Florida’s Parental Rights in Education law — or what critics have dubbed the “Don’t Say Gay” law — goes into effect Friday, some of the state’s public school districts have begun rolling out new policies to limit LGBTQ issues and identities from being discussed in the classroom.

On Tuesday night, the Leon County School Board unanimously approved its “LGBTQ Inclusive School Guide,” which includes a provision to alert parents if a student who is “open about their gender identity” is in their child’s physical education class or with them on an overnight school trip.

“Upon notification or determination of a student who is open about their gender identity, parents of the affected students will be notified of reasonable accommodation options available,” the guidelines read. “Parents or students who have concerns about rooming assignments for their student’s upcoming overnight event based on religious or privacy concerns may request an accommodation.”

Representatives of the Orange County Classroom Teachers Association accused school officials Monday of verbally warning educators not to wear rainbow articles of clothing and to remove pictures of their same-sex spouses from their desks and LGBTQ safe space stickers from classroom doors. The district’s legal department confirmed in a statement provided to the teachers’ association, which covers the Orlando area, that staff members who come into contact with students in kindergarten through third grade were cautioned about LGBTQ issues.

And late last month, the School District of Palm Beach County sent out a questionnaire asking its teachers to review all course material and flag any books with references to sexual orientation, gender identity or race, said a Palm Beach County high school special education teacher, Michael Woods. Several weeks previously, the district removed two books — “I Am Jazz” and “Call Me Max” — that touch upon gender identity, he said.

The so-called Don’t Say Gay law, HB 1557, bans “instruction” about sexual orientation or gender identity “in kindergarten through grade 3 or in a manner that is not age appropriate or developmentally appropriate for students in accordance with state standards.” A provision in the law also requires school staff members to alert parents about “critical decisions affecting a student’s mental, emotional, or physical health or well-being,” which many advocates have interpreted as a way to force educators to out their gay or trans students. When teachers “believe that disclosure would result in abuse, abandonment, or neglect,” they are exempt from doing so.

Legislators who support the measure — which Gov. Ron DeSantis, a Republican, signed in March — have repeatedly stressed that it will apply only to children in kindergarten through third grade and that it is about giving parents more jurisdiction over their young children’s education. They have also contended that it will not prohibit teachers and students from talking about their LGBTQ families or bar classroom discussions about LGBTQ history, including events like the 2016 attack at the Pulse gay nightclub in Orlando.

But critics and legal experts have said the broad language of the law could open school districts and teachers to lawsuits from parents who believe any conversation about LGBTQ people or issues is “not age appropriate.” (Parents will be able to sue school districts for alleged violations, damages or legal fees.)

The state Education Department is expected to release more information about the parameters of its standards later this summer. In an interview in April with Fox News host Laura Ingraham, DeSantis suggested the standards would apply the law beyond third grade and added that “things like woke gender ideology have no place in the schools, period.”

State Rep. Carlos Smith, a Democrat who is gay and has been an outspoken critic of the new law, said he was “not surprised” that schools in the state were announcing the policies and guidelines.

“We talked about this from the beginning,” he said. “What’s happening right now — with the censorship of rainbow flags and school districts preparing to basically push LGBTQ students and teachers into the closet — is exactly what we said would happen with the ‘Don’t Say Gay’ law.”

Asked whether DeSantis wanted to respond to school districts’ new guidelines on LGBTQ issues that appear to supersede the parameters of the new law, his press secretary, Christina Pushaw, said the Education Department is responsible for working with school districts to implement policies.

“This is not something the governor himself does,” she wrote in an email.

Five other states — all of them in the South — have enacted laws that limit instruction or discussions about LGBTQ people or issues in school, and at least 32 others have proposed such measures this year, according to according to the Movement Advancement Project, an LGBTQ think tank that has been tracking the bills.

Smith stressed that the policies will have consequences for lesbian, gay, bisexual, transgender and queer students, pointing to the disproportionately high rates of suicide attempts among the country’s LGBTQ youths. A survey this year by the Trevor Project, an LGBTQ youth suicide prevention and crisis intervention organization, found that nearly 50% of the 35,000 LGBTQ youths surveyed said they seriously considered suicide within the last year.

“Creating safe spaces for LGBTQ kids in schools is a matter of life or death,” Smith said. “Ron DeSantis is creating toxic environments in our classrooms that can have devastating consequences for queer youth, and he does not care. It’s all about politics for him.”

In a letter addressed to the Orange County Classroom Teachers Association, the district’s general counsel claimed that a number of statements about what the Parental Rights in Education law would prohibit are not accurate, including a claim that “safe space stickers will be removed from classroom doors.” However, the letter then says it is “recommended that the safe space stickers be removed from K-3 classrooms so that classroom instruction did not inadvertently occur on the prohibited content of sexual orientation or gender identity.”

“Out of one side of their mouth, they’re saying it’s not accurate, and out of the other side, they’re saying, ‘Yeah, you might want to be careful,’” said Clinton McCracken, the president-elect of the Orange County Classroom Teachers Association.

He expressed overall frustration with the new law and said his district’s attempt to clarify the legislation created even more confusion.

“So, which is it? Are teachers in K through 8 supposed to go back into the closet, according to our legal team? Or are they allowed to act like every other heterosexual teacher who has a picture of a spouse on their desk?”

In Palm Beach County, Woods, who is gay, said that after they received the questionnaire from school officials to flag course material or books with LGBTQ references, many of his colleagues are nervous they’ll be reprimanded if they miss something.

“I’ve had colleagues say to me, ‘Well, I’m just going to pack all of my books away and not have any out at all,’” he said. “That sounds like a knee-jerk reaction, but when you’re in that situation, it’s just one more stressor that you’re going to put on yourself. And is that really the hill you want to die on?”

Some LGBTQ teachers in school districts where guidelines have yet to be issued are even less sure of what they can or cannot say and wear next school year.

Brian Kerekes teaches math at a high school in Osceola County, which has yet to issue guidance for complying with the new law. Without guidelines in place, he worries that mistakes are bound to happen. Recently, he said, a staffer was asked to remove a “genderbread person” — an animated diagram used to teach children about gender identity — from his office.

“We’re just caught in the middle trying to figure out what is and isn’t OK while still trying to do what is our primary function, which is supporting our students and giving them a safe space to learn,” he said. “It’s going to be a mess.”

Kerekes said he also expects school that districts will start letting go of teachers who are accused of violating the law even if they are found to have done nothing wrong. He pointed to the fact that all of the state’s public school teachers are hired on a year-to-year contractual basis and that the law prohibits school districts from recouping legal fees in cases they win.

“Even if an investigation turns out to be bogus, a principal could still decide that it just isn’t worth having the teacher around anymore and just drop them,” he said. “I just worry that we’re going to be spending our time on nonissues instead of doing our jobs.”