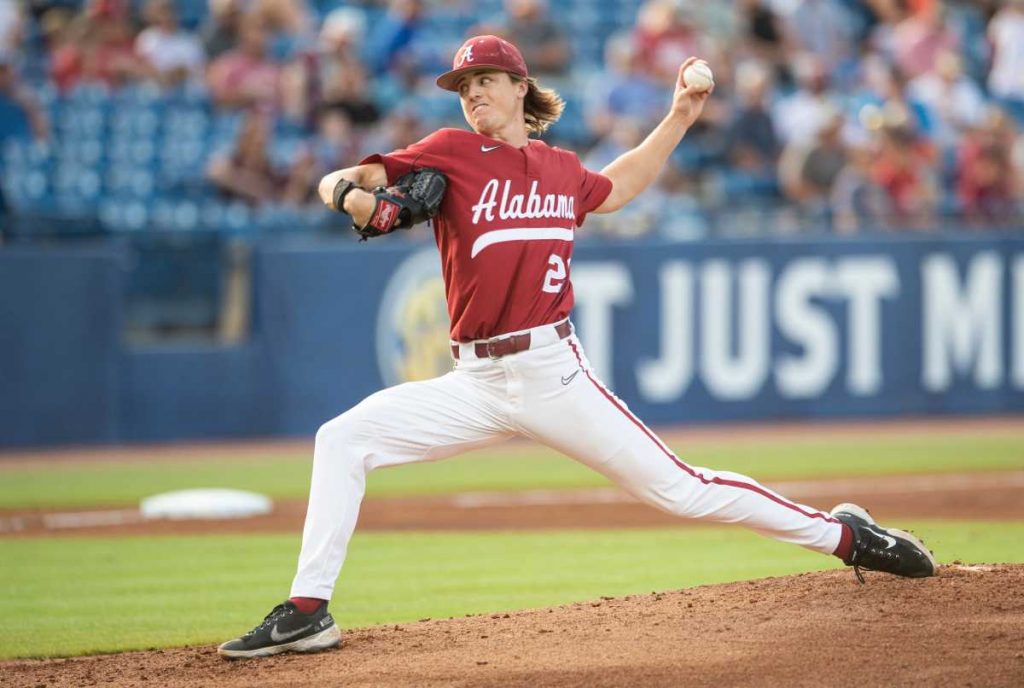 HOOVER — Alabama’s improbable run in this year’s SEC Tournament experienced its first snag. After building a five-run lead through four innings, the 11-seed Crimson Tide’s pitching staff ran out of steam as it allowed 2-seed Texas A&M to rally back for a 12-8 victory Friday night.

As was the case in wins against Georgia and Arkansas earlier in the tournament, Alabama jumped out to an early advantage Friday night, using a combination of timely hitting and poor Texas A&M fielding to take a 6-1 lead after four innings.

Only this time the Tide’s pitching staff was unable to maintain the advantage.

Alabama left a withering Grayson Hitt in the game one batter too long as the starting pitcher allowed a three-run home run to Texas A&M’s Dylan Rock to cut the Crimson Tide’s lead to 6-4 in the top of the fifth.

Hitt had held the Aggies to one run on two hits over the first four innings but began to falter in the fifth, beginning the inning by throwing seven straight balls. After allowing two runners to reach base, the left-hander came a strike away from escaping the jam before seeing his 3-2 pitch to Rock lined over the left-field wall.

“Those decisions are always easier in hindsight when you see the result, but I thought Grayson really executed a lot of pitches and was really pitching well,” Alabama head coach Brad Bohannon said of the call to leave Hitt in the game. “Those are tough decisions of knowing what you’ve got in the pen. I thought he had just kind of earned — Dylan Rock, he’s scary. I just thought Grayson running sliders in on his hands and fastballs in was a better matchup than what we had getting loose in the pen.

“And no disrespect to those guys. Look, man, they’re really good. Sometimes they get a hit, and even if I had it to do all over again, I would have given that batter to Grayson. I tip my cap to Dylan Rock. He put a good swing on a 3-2 breaking ball.”

Alabama’s implosion continued the following inning as three more Texas A&M runs allowed the Aggies to take a 7-6 lead. A pair of walks and a hit by pitch loaded the bases for Texas A&M before a single from Kole Kaler tied the game. From there, the Aggies went on top as Rock was hit with the bases loaded and two outs.

Texas A&M added to the Crimson Tide’s misery with four runs in the top of the seventh inning. Three of those came on a two-out home run by Trevor Werner. The Aggies scored eight of their runs with two outs.

Alabama rallied back with a pair of runs in the bottom of the seventh on a bases-loaded double by Bryce Eblin but was unable to get anything more than that, stranding two runners on base in the inning. The pair of runs represents the only time the Crimson Tide has scored outside of the first four innings in all three of its games in the tournament.

You know, these teams are good. You’re not going to score in every inning,” Bohannon said. “I would love to score early and score in the middle and score late. Hitting is hard, and you score eight runs against a team like Texas A&M, you’ve got to win that game if you can, and we didn’t do enough out of the bullpen tonight.”

Alabama’s early lead was aided by some sloppy fielding from Texas A&M. Following a leadoff single from Caden Rose in the bottom of the first, Andrew Pinckney looked as though he would ground out into a double play. However, a low throw from shortstop Kale Kaler bounced off the glove of first baseman Jack Moss and into right field, allowing Pinkney to reach third base with one out. A sacrifice fly from Drew Williamson gave Alabama its first run the next at-bat.

After allowing the Aggies to tie the game in the top of the second inning, the Crimson Tide continued its hot hitting in the bottom of the frame. Following one-out singles from Tommy Seidl and Jim Jarvis, Rose tripled off the right-field wall to put Alabama up 3-1. Rose then scored on an error by Werner, who booted a softly-hit ground ball down the third-base line. Texas A&M committed five errors on the day.

The Crimson Tide went up 6-1 in the bottom of the fourth thanks to RBI singles from Pinckney and Dominic Tamez before allowing Texas A&M to rally back.

Friday’s loss snaps a five-game winning streak for Alabama (31-26) dating back to a regular-season series win over Arkansas. Entering Friday, the Crimson Tide was the No. 61 team in Baseball America’s 64-team NCAA Tournament projection. Despite recording wins over Georgia and Arkansas earlier in the tournament, Alabama likely needs one more win to feel comfortable about being named to an NCAA regional on Monday.

“I know I’ll feel better if we win another one,” Bohannon said. “We’re going to approach tomorrow like our season is over if we don’t win, I can tell you that.”