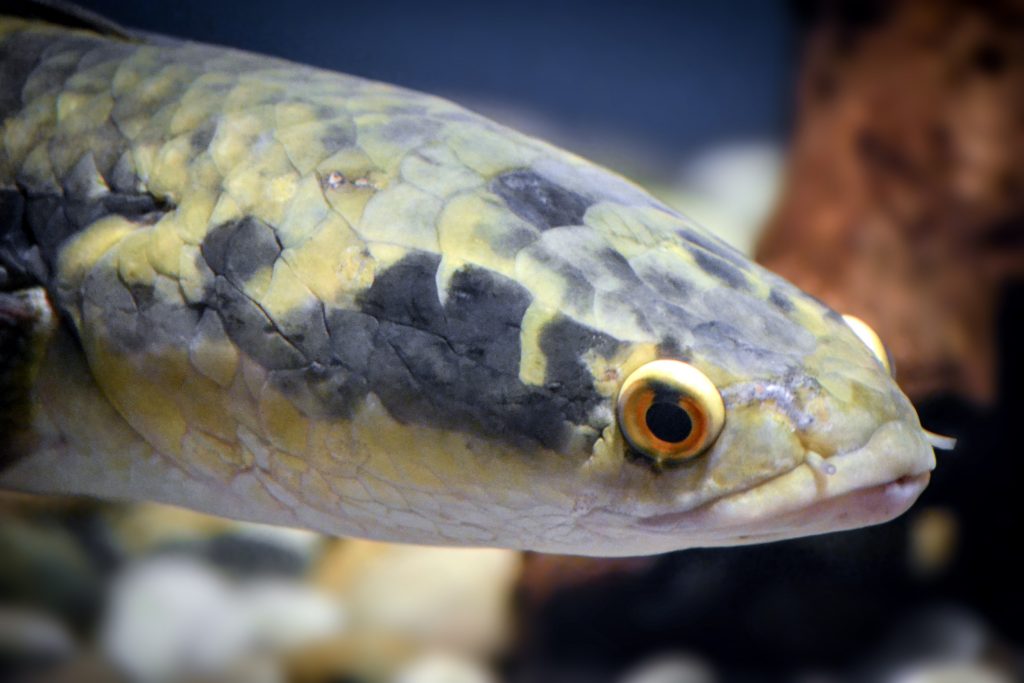 An aggressive frog-eating fish that breathes air has been found in new part of Florida, raising concerns over the amount of damage the invasive species could do.

The goldline snakehead was unexpectedly discovered in a freshwater pond in Manatee County by scientists from the University of Florida’s Museum of Natural History. This is the first time the fish has been found in the Gulf Coast region.

Snakeheads are freshwater fishes native to Asia and Africa. It is believed they came to America through aquarium dumpings and fish market releases.

The large-mouthed species is predatory and can even breathe air and live outside of water for around four days. While on land, it is also capable of traveling short distances.

The species is considered invasive as it has the potential to destroy and threaten native ecosystems. A snakehead can also carry as many as 50,000 eggs, meaning they have the potential to reproduce in vast quantities.

The species is also especially aggressive to other species, meaning they can wipe out large quantities of native fish.

This newly discovered population is not the only one to live in Florida—another known population has lived in Broward County since 2000.

Since they were introduced to the environment, they have slithered into waterways and spread to other areas like Miami-Dade and Palm Beach.

This latest discovery, which was detailed in a paper published in the journal Aquatic Invasions, was a surprise to scientists, considering the distance between this population, and ones that are already established.

For this reason, scientists do not believe they did this on their own. It is more likely due to human interference, the study said.

After the discovery, officials with the Florida Fish and Wildlife Conservation Commission removed almost 400 of the animals from the pond to prevent them doing more damage to the ecosystem, the Florida Museum reported.

The scientists also observed a surprising behavior in this particular population of snakeheads.

In 2020, scientists observed these snakeheads emerging onto the riverbank where some green tree frogs were active. The fish struck at the frogs and returned with its prey to the water. This is another example of how the fish can be a disturbance to the ecosystem.

Robert Robins, ichthyology collection manager at the Florida Museum of Natural history and co-author on the study, said in a press release: “Any reproducing non-indigenous species has the potential for deleterious effects on the environment to which it has been introduced. Most never become invasive, but some do.”

So far, there is no evidence that the snakeheads spread any further from this pond but more research is needed to ensure this.

Do you have a tip on a science story that Newsweek should be covering? Do you have a question about invasive species? Let us know via science@newsweek.com.