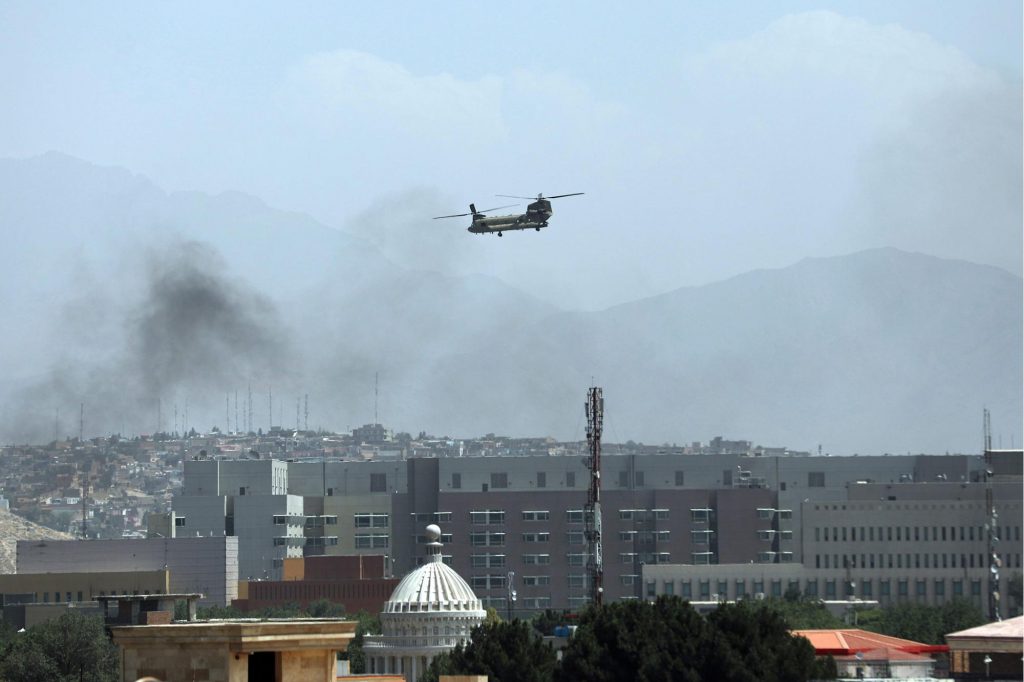 Afghanistan will continue to face the effects of its government’s collapse Monday after Taliban fighters gained control of the country’s capital. With control in Kabul, the insurgent group is likely to declare the Islamic Emirate of Afghanistan from the presidential palace, an official told The Associated Press. The quick turn of events in Afghanistan comes after President Ashraf Ghani fled the country while the Taliban entered the capital city, and American troops scrambled to evacuate thousands of U.S. diplomats and Afghans from the U.S. Embassy. As of late Sunday, all American diplomats have been moved from the U.S. Embassy in Kabul to the city’s airport, the State Department said. The disintegration of the Afghan government control came at at a rapid pace — following two decades of U.S. efforts to reshape the region as part of its “war on terror.”

Prefer to listen? Check out the 5 Things podcast:

Tropical Storm Fred may hit Florida with severe conditions Monday, as a tropical depression looms. Fred, which regained tropical storm status Sunday, could blast parts of the panhandle with up to a foot of rain and possibly tornadoes Monday and Tuesday, the National Weather Service said.  On the forecast track, the system was expected to cross the Gulf of Mexico and make landfall in the western Florida Panhandle Monday afternoon or night, the weather service said. Looking ahead, Grace could be worse. A tropical depression right now, Grace appears to track “slightly farther to the north compared to Fred, so places like the United States… could endure greater impacts compared to Fred,” AccuWeather Senior Meteorologist Adam Douty warned. Douty added Grace could slam parts of the Southeast U.S. with heavy rains and strong winds by week’s end if it maintains its organization.

Starting Monday, proof of COVID-19 vaccination will be required for people to enter indoor restaurants, gyms and entertainment venues in New York City. It’s the first of its kind vaccine requirement in a major U.S. city. “If we’re going to stop the delta variant, the time is now,” said Mayor Bill de Blasio when announcing the Key to NYC Pass. In addition, Puerto Rico will also require COVID-19 vaccination for all guests of hotels and short-term rentals beginning Monday. “We cannot lower our guard,” said Gov. Pedro Pierluisi. “There are vaccines for everyone. Vaccinations are the solution.” People who refuse to get inoculated will be required to submit a weekly negative COVID-19 test. Violators will face up to a $5,000 fine or six months in jail, with few exceptions.

In a hearing scheduled to begin Monday, a judge in Los Angeles will hear evidence on the temporary restraining order obtained by a woman against Dodgers pitcher Trevor Bauer following two encounters. In her request for a restraining order, the woman included photos of facial injuries. She said Bauer choked her unconscious during both incidents and punched her the second time. Bauer’s representatives have denied the allegations and said his relations with the woman were consensual. In court records, they show digital messages in which the woman asks Bauer for “rough” sex, including being choked out and slapped in the face. Bauer, 30, has been on paid administrative leave since July 2 after signing a three-year, $102 million contract with the Dodgers this winter.

More than 100 Sinclair stations will be removed from Dish after the two companies failed to reach a new agreement after its current one expires Monday The stations include 97 ABC, CBS, Fox and NBC affiliates. Their removal would impact 3.5 million Dish subscribers across 38% of the country, Sinclair Broadcast Group said. As is typical in these carriage disputes, both sides say the other is to blame. Dish alleges Sinclair is “trying to use its market power to demand an unreasonable fee increase,” while Sinclair alleges Dish has “a demonstrated track record of dropping local and national programming that viewers value.” Here’s a list of channels that Sinclair says could be dropped.