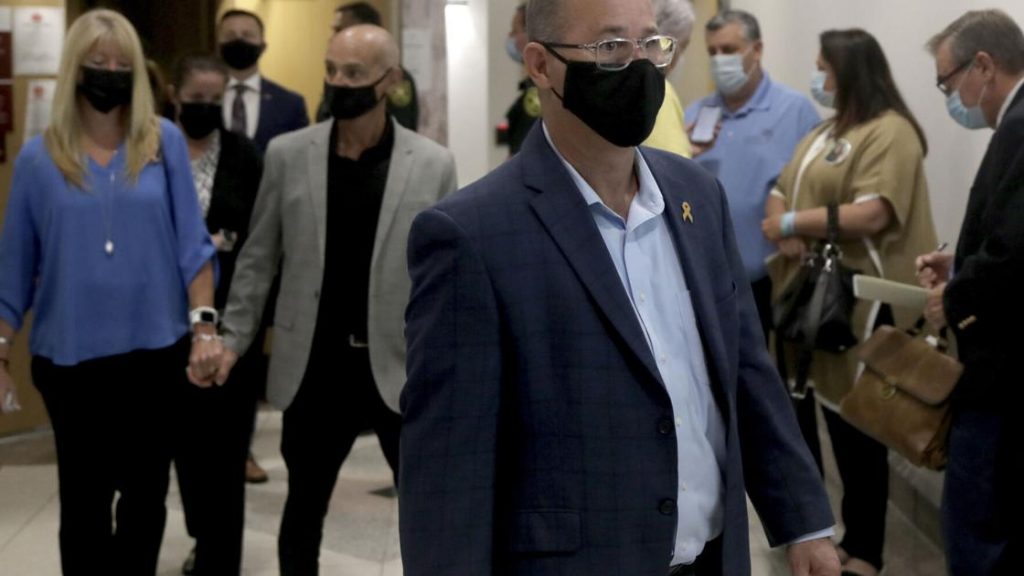 WASHINGTON (AP) — The father of a 14-year-old girl killed in the 2018 Florida high school shooting massacre announced Thursday that he’s joining the top ranks of a progressive anti-gun group to promote like-minded political candidates around the country ahead of next year’s midterm elections.

Fred Guttenberg will be a senior adviser to Brady PAC. His daughter Jamie, an aspiring dancer and gymnast, died with 16 others during the Valentine’s Day 2018 shooting at Marjory Stoneman Douglas High School in Parkland, Florida.

Nikolas Cruz pleaded guilty Wednesday to 17 counts of first-degree murder for that shooting and could face the death penalty during sentencing in January. Guttenberg, who has become a nationally known activist in the years since the shooting, said he visited his daughter’s grave this week and “asked her for guidance. ’Cause Jamie is my strength.”

“Jamie may only have been 14, but she was the toughest, wisest person I ever knew,” Guttenberg said in an interview. “If you want to know my motivation for why I’m doing this with Brady PAC right now, that’s the reason.”

Brady PAC, formed leading up to 2018′s midterm elections, supports candidates who promote gun violence prevention and spent $5 million during the 2020 election cycle. It has promised to pump millions more into next year’s races.

Guttenberg noted that Democrats, most of whom agree with him and Brady PAC on top gun issues, control Congress and could hold both chambers after 2022 — even though the party that wins the White House, as Democrats did through Joe Biden in 2020, historically loses seats in the next election.

“I think people need to stop acting like everyone knows what’s going to happen in 2022 and get back to working for what you want to happen,” Guttenberg said. “I want more gun safety candidates elected to the House and the Senate. Period. Full stop. And I think that voters agree with me.”

Cruz killed 14 students and three staff members during a seven-minute rampage through Stoneman Douglas, using an AR-15 semiautomatic rifle to shoot victims in hallways and classrooms. Cruz had been expelled from the school a year earlier after a history of threatening, frightening, unusual and sometimes violent behavior that dated to preschool.

The shootings caused some Stoneman Douglas students to launch the March for Our Lives movement, which pushes for stronger gun restrictions nationally. Besides Guttenberg, several other parents of students killed have also become activists.

Last February, Guttenberg attended President Donald Trump’s State of the Union address and began yelling after the Republican president said, “I will always protect your Second Amendment right to keep and bear arms.” Guttenberg was escorted out and later apologized via Twitter.

Guttenberg also drew attention in Congress in September 2018 when he attempted to shake hands with Supreme Court nominee Brett Kavanaugh during a break at the latter’s Senate confirmation hearing. Kavanaugh looked at him, turned and walked away. Kavanaugh later said that he had assumed Guttenberg was a protester and that he would have expressed his sympathy and shaken Guttenberg’s hand had he recognized him before being whisked away by his security detail. Kavanaugh was confirmed to the court.

Brady PAC is the political arm of a nonprofit named in honor of former White House press secretary James Brady, who suffered a bullet wound to his head in the assassination attempt against President Ronald Reagan outside the Washington Hilton Hotel in 1981.

Together with his wife, Brady became a leading gun control activist before his death in 2014. A federal law requiring a background check on handgun buyers bears Brady’s name, as does the White House press briefing room.