Abcarian: Amid Florida’s fight with Disney over trans rights, a Disney family member comes out as trans 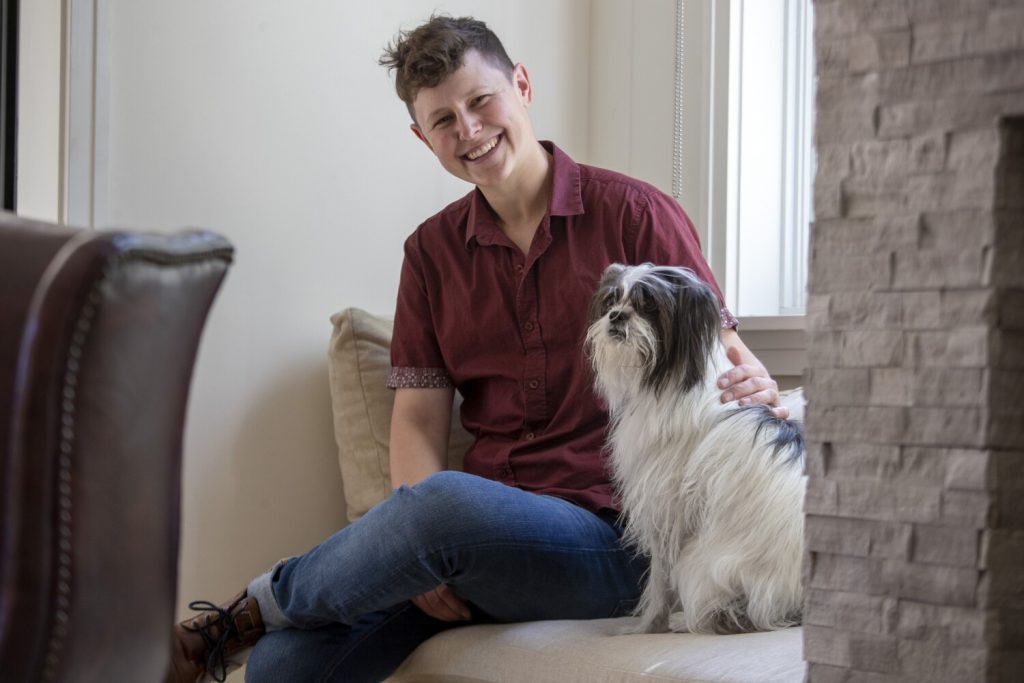 The Republican governor of Florida picked a fight with the Walt Disney Co. the week before last after Disney belatedly proclaimed its opposition to the state’s new “Don’t Say Gay” law.

It was curious to a lot of folks that Disney’s new CEO, Bob Chapek, initially hadn’t wanted to get involved. Disney has long been seen as being on the right side of such issues, and it was even the subject of a failed boycott by the religious right more than 25 years ago after Disney offered health benefits to the partners of gay employees.

Chapek soon changed his mind after an employee revolt, and also announced the company would donate $5 million to the Human Rights Campaign, the largest LGBTQ advocacy group in the country.

Undaunted, Gov. Ron DeSantis signed the bill into law. Florida schools are now prohibited from teaching about sexual orientation or gender identity from kindergarten through third grade. From fourth grade on, they may teach the topics only in ways deemed developmentally appropriate by the state.

Have you noticed how snitty Republicans get when they’re called out for cynically sacrificing the well-being of vulnerable children to make political points?

DeSantis, miffed by Disney’s rebuke and auditioning for his next role as Republican presidential candidate, threatened to strip Disney of the self-governing privileges it has enjoyed in the state since Disney World, in Orlando, was on the drawing board in 1967.

“Disney has alienated a lot of people now,” DeSantis said during a news conference. “And so the political influence they’re used to wielding, I think has dissipated. And so the question is, why would you want to have special privileges in the law at all? And I don’t think that we should.”

He accused the company of trying to “impose a woke ideology on Florida.”

Which is funny, because the word “woke” was not even used in its present context when Disney began offering health benefits to the partners of its LGBTQ employees, allowing displays of pride flags and embracing annual “gay days” at its parks.

Across the country, in Toluca Lake, one branch of the Disney family tree was paying close attention to the controversy.

They also took note that the Human Rights Campaign refused to accept Disney’s $5-million gift until the company did a better job standing up for gay and trans rights.

So last week, Roy P. Disney, grandson of the company’s co-founder (and great-nephew to Walt); his wife, Sheri; and two children announced they would match up to $500,000 in donations to the HRC.

“Equality matters deeply to us,” Roy wrote in an appeal, “especially because our child, Charlee, is transgender and a proud member of the LGBTQ+ community.”

Charlee had announced a $250,000 matching grant to HRC at the group’s annual gala in Los Angeles in March. Later, said Sheri Disney, the family decided to double the amount.

The HRC gala was something of a public coming-out for Charlee, 30, a high school biology and environmental science teacher who has little experience with public speaking or advocacy.

“I feel like I don’t do very much to help,” Charlee told me in a Zoom call with Sheri on Thursday. “I don’t call senators or take action. I felt like I could be doing more.”

Sheri Disney told me her family was disappointed by the Disney Co.’s initial refusal to take a stand against the Florida law but had no doubt the company would make it right. She said she thought of the $500,000 matching grant as a “bridge” demonstrating the family’s commitment to gay and trans rights.

The gift was also a way to remind the world that LGBTQ kids need love and support, not shame and erasure. “I have a trans kid, and I love my kid no matter what,” she said.

For years, Charlee identified as gay, which came as no surprise to Sheri, who remembers Charlee at 2 or 3 tugging her away from the little girls’ shoe section, saying, “But mom, I’m a boy on the inside.”

Then, four years ago, Charlee came out as trans. And even with all the apparent privilege in the world, they said their journey has been difficult.

“I had very few openly gay role models,” Charlee said. “And I certainly didn’t have any trans or nonbinary role models. I didn’t see myself reflected in anyone, and that made me feel like there was something wrong with me.”

Charlee can’t abide the idea that states are trying to make life harder for trans people.

LGBTQ kids, Charlee said, already have to deal with high rates of depression and anxiety, not to mention bullying and suicide. “Then to put something like this law on top of that? They can’t learn about their community and their history at school, or play sports or use the bathroom they want to use?”

Listen, if it comes down to DeSantis vs. Disney, my money will be on Disney, a company that, for all its faults (including the failure to showcase gay or trans characters in its entertainment offerings), is a beloved, generations-old American institution.

Cruella DeSantis, on the other hand, is a merchant of hate. He probably skins puppies in his free time, too.