A hurricane is expected to hit Mexico next week. Forecasters have a message for Florida. 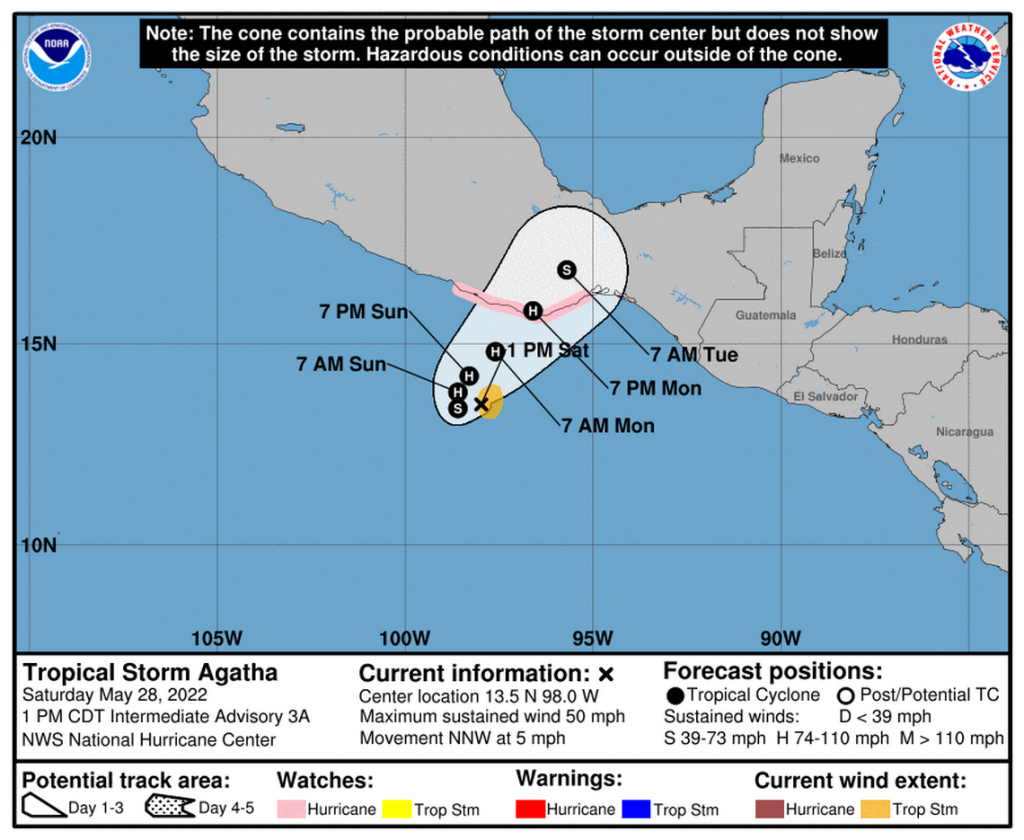 Tropical Storm Agatha on Sunday strengthened into a hurricane expected to make landfall on the southern coast of Mexico Monday. Will the storm emerge from its bout with Mexico and threaten Miami?

As of the 5 p.m. Sunday advisory from the National Hurricane Center, Agatha’s winds were 110 mph with forecasters predicting that the storm will gain strength as it approaches land.

Agatha is expected to make landfall in southern Mexico on Monday as a Category 3 major hurricane. Hurricane warnings and watches have been issued for the southern coast of Mexico from Salina Cruz to Punta Maldonado.

The question for Florida is what happens after its bout with Mexico’s mountains and terrain? Will the storm regroup in the Gulf and set its sights on the state or elsewhere in the United States?

Forecasters had low hopes that Agatha would survive its journey through southern Mexico, saying it is expected to “dissipate over the rugged terrain of southern Mexico on Tuesday.”

Sunday’s forecast showed a 30% chance that the remnants of Agatha could reform into a tropical depression in the next five days — this time in the Gulf of Mexico.

If the storm does reform into something stronger, like a tropical storm, it would likely ditch the name Agatha and take on the first name of the Atlantic season, Alex. Channel 10 Meteorologist Micheal Lowry tweeted that Agatha would only hold onto its name if it maintained tropical depression or storm status the whole time, which is unlikely.

Eric Blake of the National Hurricane Center on Saturday said the message at the moment is to be prepared. We should be, anyway. Check your calendar. Hurricane season officially begins June 1 on Wednesday and, clearly, Mother Nature doesn’t abide by calendars given the first-named storm of the season’s jump start.

“Hurricane season starts next week and so we need to be ready, right?” Blake said.

READ NEXT: How busy will hurricane season be this year? NOAA predicts ‘above average’ with 6 to 10

Former CBS4 meteorologist Craig Setzer said tropical effects from the Gulf and Caribbean could be headed to Florida by late next week or weekend in a series of posts on Twitter Sunday morning.

“Bottom line, we’ll keep an eye on these areas for late week/weekend. Too early to tell where or what if anything for Florida,” Setzer told his followers.

While Mexico could be facing life-threatening mudslides and other ill effects from Agatha on Monday, according to CBS News, South Florida’s Monday Memorial Day holiday promises to be a wet one, according to the National Weather Service in Miami.

Memorial Day eyes a 70% storm chance — and some could be heavy with gusty “sub-severe” winds. There’s a high risk of rip currents along Miami-Dade, Broward and Palm Beach County beaches.

READ MORE: What can you expect for Memorial Day weekend? That change in the weather’s not a party