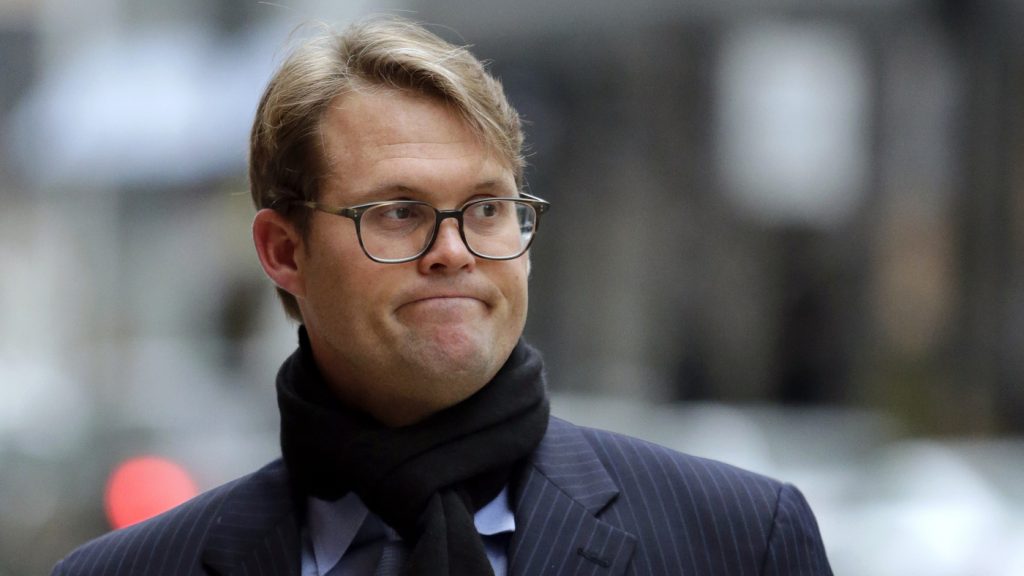 Mark Riddell arrives at federal court in Boston on April 12, 2019. The former Florida prep school administrator took college entrance exams for students in exchange for cash to help wealthy parents get their kids into elite universities.

Mark Riddell arrives at federal court in Boston on April 12, 2019. The former Florida prep school administrator took college entrance exams for students in exchange for cash to help wealthy parents get their kids into elite universities.

BOSTON — A former Florida prep school administrator was sentenced to federal prison and a decorated water polo coach at the University of Southern California was swiftly convicted by a jury in a busy Friday in Boston federal court in the long running college admissions bribery scandal.

Meanwhile, former USC coach Jovan Vavic, who faked the athletic credentials of rich students so they could gain admission, was convicted on all three counts of fraud and bribery he faced after a jury deliberated less than a day following his nearly monthlong trial.

The investigation announced in 2019 exposed corruption in the college admissions process at Yale, Stanford, Georgetown and other sought-after schools, and implicated wealthy and connected parents, including actors Felicity Huffman and Lori Loughlin and Loughlin’s fashion designer husband, Mossimo Giannulli.

“To say the conduct in this case was reprehensible is an understatement,” Rollins said afterward, acknowledging the sprawling investigation preceded her taking office earlier this year. “The rich, powerful and famous — dripping with privilege and entitlement — used their money and clout to steal college admissions spots from more qualified and deserving students.”

Joseph Bonavolonta, head of the FBI’s Boston office, said he hoped “many important lessons” were learned from the investigation and that colleges make sure the proper safeguards are in place.

“First and foremost, you can’t pay to play and lie and cheat to circumvent the college admissions process,” he said. “Because you will get caught.”

Vavic, a 60-year-old, who guided USC’s men’s and women’s water polo teams to 16 national championships, strode out of the courtroom Friday with his family, declining to comment on the verdict.

Prosecutors said he received about $250,000 in bribes for designating unqualified students as water polo recruits so they could attend the elite Los Angeles school.

But lawyers for Vavic argued he was just doing what he could to raise money for his dominant, championship-winning program as athletic officials had demanded. They maintained he never lied, never took a bribe and was a victim of USC’s desire to cover up a “pervasive culture” of accepting wealthy students who could provide donation windfalls.

The university, which fired Vavic after his 2019 arrest, has stressed its admissions processes are “not on trial.”

In a separate courtroom just minutes after Vavic’s verdict was read, Riddell was contrite as he faced sentencing on fraud and money laundering conspiracy charges.

The Harvard graduate, who emerged as a key figure in the wide-ranging scandal, apologized to the many students that lost out on college opportunities because of his “terrible decision.”

He said he brought shame to his family and pleaded for leniency for cooperating with law enforcement officials and for committing to make amends now and going forward for his actions.

Riddell’s lawyers said he should serve one to two months in prison because he was neither the ringleader of the scheme nor a university insider, like the coaches and college administrators implicated. They also noted he’s already paid nearly $166,000 toward the forfeiture obligation.

Judge Nathaniel Gorton, however, sided with prosecutors who had argued for the four-month sentence.

He said Riddell played a key role for many years in the scheme by secretly taking the ACT and SAT for students, or correcting their answers.

“And for what?” the judge said. “You did not need the money. How could you have stooped so low?”