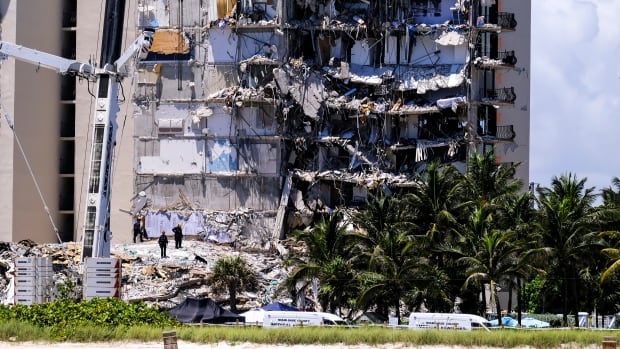 The death toll after the collapse of a 12-storey condo building in south Florida has risen to nine, with dozens still missing, officials said on Sunday, as questions arose about the tower’s structural integrity.

Nine people are confirmed dead and more than 150 are still unaccounted for after a condo building collapsed outside Miami, while the search for survivors continues and more is learned about the building’s history. 2:59

The death toll after the collapse of a 12-storey condo building in south Florida has risen to nine, with dozens — including four Canadians — still missing, officials said on Sunday, as questions arose about the tower’s structural integrity.

Rescuers digging through the rubble in Surfside, a shore town near Miami, sought to reassure families that they were doing as much as possible to find missing loved ones.

But the crews said they needed to work carefully for the best chance of uncovering survivors at what’s left of the Champlain Towers South, which collapsed early Thursday as most residents slept.

Relatives were growing increasingly desperate for news and worried about the slow progress and dwindling hopes. Some asked to visit the site so they could shout messages to their loved ones, “so they can hear our voices.” On Sunday afternoon, relatives were driven to a location next to the site as crews continued their work.

TV cameras showed two buses pull up and groups of relatives step off. They walked to an area near the scene, where officials said they could observe and have a moment of reflection.

“We are just waiting for answers. That’s what we want,” said Dianne Ohayon, whose parents, Myriam and Arnie Notkin, were in the building. “It’s hard to go through these long days and we haven’t gotten any answers yet.”

Scores of rescue workers remained on the massive pile of rubble, searching for survivors but so far finding only bodies and human remains. No one has been pulled alive from the pile since hours after the collapse on Thursday.

Authorities said their efforts are still a search-and-rescue operation. Alan Cominsky, chief of the Miami-Dade Fire Rescue Department, said they are holding out hope of finding someone alive, but they must be slow and methodical.

“The debris field is scattered throughout, and it’s compact, extremely compact,” he said.

Debris must be stabilized and shored up as they go.

“If there is a void space, we want to make sure we’re given every possibility of a survivor. That’s why we can’t just go in and move things erratically, because that’s going to have the worst outcome possible,” Cominsky said.

Teams from Mexico and Israel have been brought in to support the rescue operation.

Evidence of structural damage in 2018 report

Officials have said they have not yet determined the cause of the collapse. However, a 2018 report showed that an engineer found evidence of major structural damage beneath the pool deck and “concrete deterioration” in the underground parking garage of the oceanfront condominium.

Further documentation showed the estimated cost of the repairs would total more than $9 million US. That included more than $3.8 million for garage, entrance and pool remediation and nearly $3.2 million for fixes to the exterior facade.

That’s according to emails from the engineering firm of Morabito Consultants that were released by the town of Surfside.

An earlier publication of another document from the firm showed the ground-floor pool deck of the 40-year-old building was resting on a concrete slab that had “major structural damage” and needed to be extensively repaired.

That report also uncovered “abundant cracking and spalling” of concrete columns, beams and walls in the parking garage.

Four Canadians remain among those who are still unaccounted for in the wake of the deadly collapse.

“This is a terrible situation, it’s shocking and it’s tragic,” Canada’s consul general in Miami, Susan Harper, told CBC News on Saturday as she stood in front of the family reunification centre, not far from the search-and-rescue site in Surfside.

Harper initially said the Canadians were from two different families, but on Sunday she told CBC News that a third family was involved.

Relatives from one household were making their way to Florida, Harper said Saturday, as they waited for more information about the search-and-rescue operation. A relative of another family was already in the state.

Because of privacy rules, Harper said she could not share the names, ages or any specific details about the missing.

Several Canadians own units in the building that collapsed. While Harper could not provide a specific number, government officials have been able to confirm the whereabouts of all but the four missing Canadians.

But she said consular staff are working with the families to provide what information and support they can.