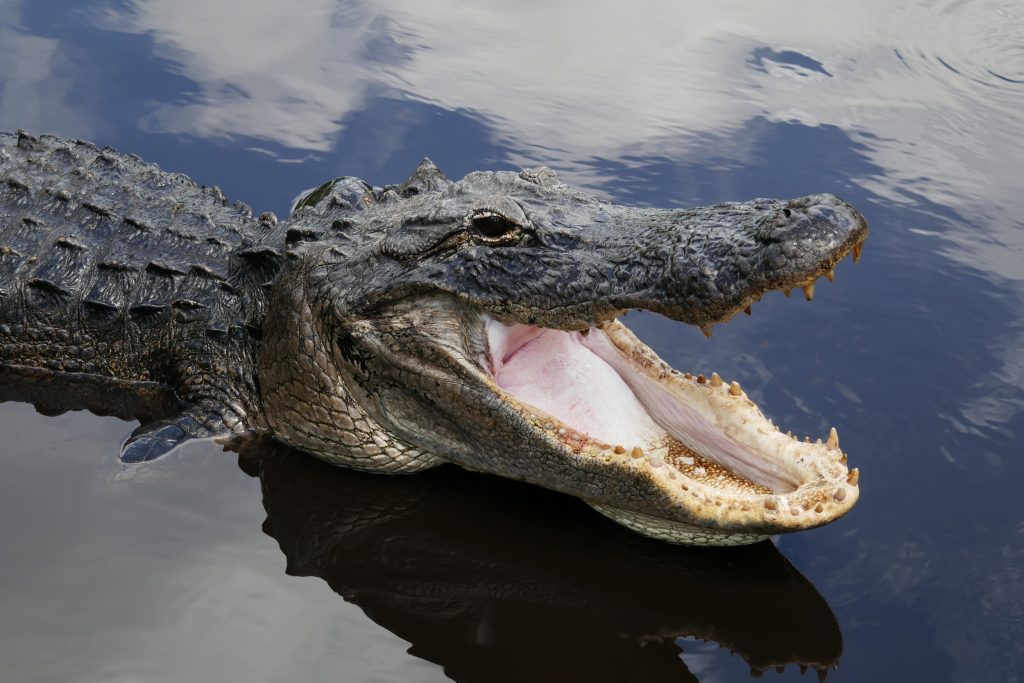 Alligators have been inhabiting our planet for millions of years and, together with crocodiles, are considered to be the closest living relatives of dinosaurs.

American alligators can be found mainly in Florida, Georgia, Alaba­ma and Louisiana. They reside in freshwater rivers, lakes, swamps and marshes.

Here are eight astonishing facts you should know about alligators.

Alligator Eyes Glow in the Dark

Like cats, alligators have a tapetum lucidum at the back of each eye. It is a reflective layer behind the retina, which increases the amount of light for night vision in many nocturnal vertebrates.

The colour of eyeshine changes from species to species and is red in alligators. A great way to locate the reptiles on a dark night.

Alligators Can Have 3,000 Teeth in Their lives

Alligators have between 74 and 80 teeth in their mouth at a time which are replaced once worn down.

This means an alligator can go through 3,000 teeth in a lifetime, according to Smithsonian’s National Zoo and Conservation Biology Institute.

One of the Most Powerful Bites

These fascinating reptiles possess the second most powerful bite in the animal world.

They boast a bite strength of 2,125 pounds per square inch, which is enough to bite through steel. It is considered to be second only to crocodiles.

The Loudest Reptiles in the World

Alligators are also considered to be the loudest reptiles and can hit a 90-decibel bellow. In comparison, humans max out at about 70-decibel.

They make loud grunts all year round, but these are more emphasized during mating season, which typically takes place in May and June. Females lay an average of 32 to 46 eggs which hatch in late summer or early fall.

Blood Has Antibiotic and Antiviral Properties

Leading experts have found that alligators’ blood has antibiotic and antiviral properties. Particularly, scientists in Louisiana found that blood from the American alligator can successfully destroy 23 strains of bacteria, including some known to be resistant to antibiotics.

According to National Geographic, their blood can also deplete and destroy a significant amount of HIV, the virus that causes AIDS.

Their Sex is Determined by Temperature

The sex of alligators is determined by the ambient temperature of the developing eggs. In science, this process is called temperature-dependent sex determination (TSD).

Short Legs But Can Climb Trees

Despite their short legs, alligators can climb trees. A new study in Herpetology Notes found that the reptiles can climb as high as six feet off the ground. Juveniles have been spotted as high as 30 feet.

Alligator mothers are devoted parents, from the moment they build nests for their eggs to when their babies are born. When they are ready to come out of their eggs, baby alligators make high-pitched noises and their moms carry the eggs to water in their jaws so they can hatch.

Once the babies are born, mothers protect and care for them for up to three years.