5 winners and 5 losers from Week 1 of the NFL 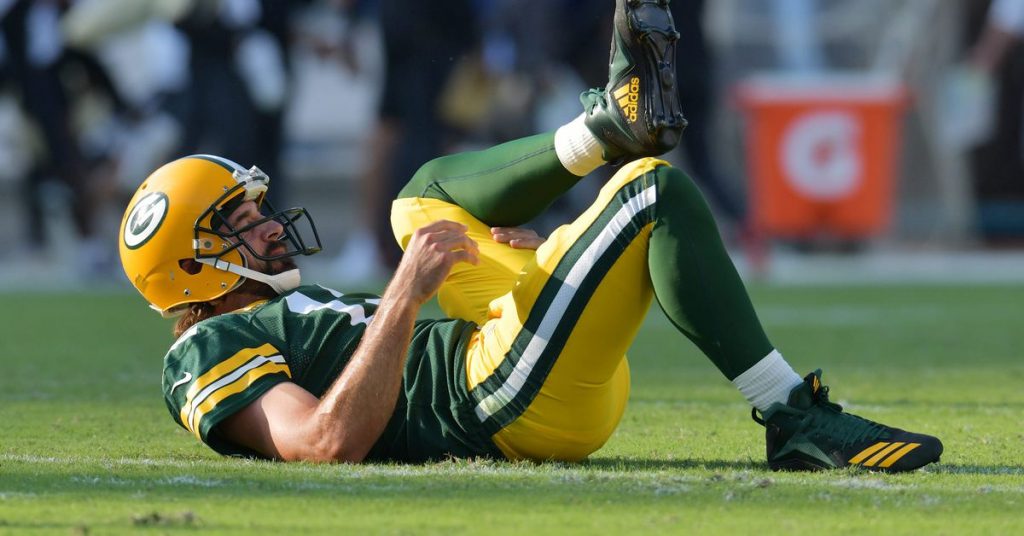 Aaron Rodgers is pretty much Dante from Clerks at this point, which I promise you is the only middle-age writer reference I’ll use today. It’s important to know when your quota has been reached. Anyway, like Dante, here’s a dude who stood around on Sunday saying “I wasn’t even supposed to be here today,” and phoning it in at work.

We’ve all been there. Every single one of us goes through these funks where we just can’t manage to give a crap, but the difference here is that Aaron Rodgers is being paid $22 million this year. Dante was definitely just shuffling along for minimum wage.

If you watched Green Bay play on Sunday you know the Packers had … let’s say “issues,” because it’s the nicest way we can. The defense was hot trash, allowing 22 first downs and a third down conversion rate of 50 percent. Then on the other side of the ball you had Rodgers, who absolutely looked every part of a Jeopardy! host who was suddenly asked to play quarterback, and not the other way around. In the end he finished his day with an atrocious 4.75 yards-per-attempt and two interceptions. Then he was benched for Jordan Love, who stepped in and played demonstrably better from the jump.

Then, to cap it all off, there was friction between Rodgers and coach Matt LaFleur in their post-game statements, just because you need a nice sour pickle on the plate with your shit sandwich.

Rodgers had a slightly different take.

“I’ll let him use those words and I’ll use, it’s just one game,” Rodgers said. “We played bad. I played bad. Offensively we didn’t execute very well. One game. We’ve got 16 to go.”

If you’ve been saving some Packers-based schadenfreude for years, probably because you’re a bitter, rival NFC North fan, then you’re rubbing your hands together like Birdman and hoping Rodgers is wrong. You want this pain to keep multiplying and causing anguish for the next 16 games. Sure, there was a certain degree of poetry in the idea that Love would take over from Rodgers in the same fashion he took over for Brett Favre, but none of us expected it to happen this quickly, and like this.

I think the thing that makes this all so weird is that we all saw this coming, we just chose to ignore it. Here was a dude who clearly didn’t want to play football for the Green Bay Packers, but the assumption just kind of became “well, he’ll put it together,” because it’s Aaron-freaking-Rodgers. However, what we saw Sunday was not a case of a dude who couldn’t play anymore, it was a guy who didn’t want to play football anymore. At least, not where he’s at. Rodgers wanted a trade. He yearned to be closer to California, and whether or not you believe that was due to Jeopardy! hosting rumors or not, the issue remains the same.

Rodgers’ name was scorching hot on Day 1 of the NFL Draft, with widespread assumption he’d be traded for a top pick. Ultimately Green Bay passed, held onto what they have, and based on Week 1 they’re on the precipice of disaster. Congrats Packers, you’re my No. 1 losers this week, and I absolutely, definitely did not see this one coming.

Now, let’s take a tour around the rest of the league.

Up to this point in the Kliff Kingsbury era: The Cardinals have been so, so sexy — and also a huge red flag at the same time. They’re the NFL’s one night stand, the hottie you pick up at the bar. For one magical night of passion you enjoy their company, then when you date them for a while you notice things. First it’s the expired milk in the fridge, then that they never wash their sheets, finally you find the old mayonnaise jar full of toenail clippings and you decide to end it. But hey, it was fun while it lasted.

Arizona were these hotties. Every year you’d look on paper and say “yeah, they could do this.” You’d see Kyler Murray dance around and throw for 500 yards, then realize they lost anyway. Sunday was a colossal, mega statement for a team in dire need of one.

On offense they were just as deadly as ever. Murray thew four touchdowns and ran in another. DeAndre Hopkins and Christian Kirk went off. It was the kind of game you’d expect to see them lose 41-38, but not this time. The Cardinals held Tennessee to 13 points, and more importantly, utterly locked down Derrick Henry, A.J. Brown AND Julio Jones, leaving the Titans offense in tatters.

Yes, it’s one game. Sure, this is only my first date with the 2021 Cardinals, but man… they look like they’ve actually put themselves together this time.

I was thiiiiiiiiiiiiiis close to putting Trevor Lawrence in the conversation too, but rookies gonna rookie. Yes he threw three picks, but also three touchdowns and over 300 yards.

Urban Meyer loves to talk about leadership, so let’s make this about leadership. The Jaguars played like a poorly coached football team. That’s all there is to it. Meyer blew up after, as he’s want to do, saying the myriad mistakes the team made were “inexcusable,” which is true, sure — but you kinda have to read between the lines a little here as well.

There have been reports Meyer’s style is rubbing people the wrong way. That he doesn’t seem to be adapting to the NFL schedule, or style, or way to treat professionals. Then you have a bunch of players struggling to work out where to line up, communication issues putting too many players on field, and giving up 82 yards worth of penalties on Sunday.

The tldr on this: Trevor Lawrence will be fine. Urban Meyer? Not so much.

Did I mention they lost to the Texans? Because lol.

The NFL is at its absolute best when it’s dumb, and Jameis Winston played some dumb, dumb football. That is the highest compliment I can offer, because this was a good kind of dumb.

I know I’m not making a ton of sense here. So firstly: Sean Payton and the Saints didn’t exactly have a ton of confidence in Winston Week 1. They had a very conservative game plan that didn’t ask him to do too much. Heck, when it was all said and done he only threw 20 damn passes.

FIVE of these went for touchdowns.

Meaningless fun extrapolation time (mostly for my amusement).
If Jameis Winston got to play every down against the Green Bay Packers, and had as many passing attempts as Peyton Manning in 2013 he’d finish the season with 164 touchdowns.

Replacing Jalen Hurts felt like the not-so-subtle goal of the Eagles for most of the offseason. Now we’ve gotta wonder, why? Don’t get me wrong, the Falcons are hot ass, but still — this was a dominant game that proved so far that Hurts really has the skills.

The quarterback finished with 264 passing yards and three touchdowns, quickly forming a rapport with rookie DeVonta Smith and showing the duo could evolve into being one of the better handcuffs in the NFL with more reps. It was so awesome to see, and should seriously assuage any thoughts of trading for Deshaun Watson.

Not only did Hurts throw the ball well, he scrambled extremely effectively — finishing with 62 yards on the ground.

So here’s the deal, right. When you look at the Minnesota roster on paper there is no reason this shouldn’t be a 12-5 or 13-4 team that makes the playoffs each year and even wins a game or two. With a well rounded defense, a top-tier running back, and arguably one of the best receiving tandems in the NFL, they should be amazing.

Not struggling and eventually losing against the Bengals.

I know Vikings fans will blame officiating, especially on two reviewed plays that was EXTREMELY suspect, but like, you gotta realize that if you’re two bad calls away from losing to Cincinnati then you’re really not that good.

It comes down to the basic fact that neither Mike Zimmer, nor Kirk Cousins can maximize the talent on this roster. It’s a mess, and right now it feels like the team is cruising to another barely-.500 season. Thankfully, the rest of the NFC North is a mess too.

There were two absolutely transcendent receiving games this week (the other being Tyreek Hill), but I’m putting Samuel over the top on this one. Finishing with 189 receiving yards, he topped HALF HIS ENTIRE 2020 SEASON IN ONE GAME!

Seriously, dude finished with 391 yards in seven games a year ago. Now he’s casually catching nine passes for almost 200 yards. It’s so awesome to see games like this. Samuel was taken in the second round of the 2019 NFL Draft and had a really solid rookie campaign, which never really got to progress because fo injury.

Now we could be seeing the start of something special and I’m on board.

You know the old saying: Every time it leaks raw sewage from the roof of FedEx Field, Dan Snyder has opened his mouth again.