3 Keys: Panthers at Capitals, Game 3 of Eastern First Round 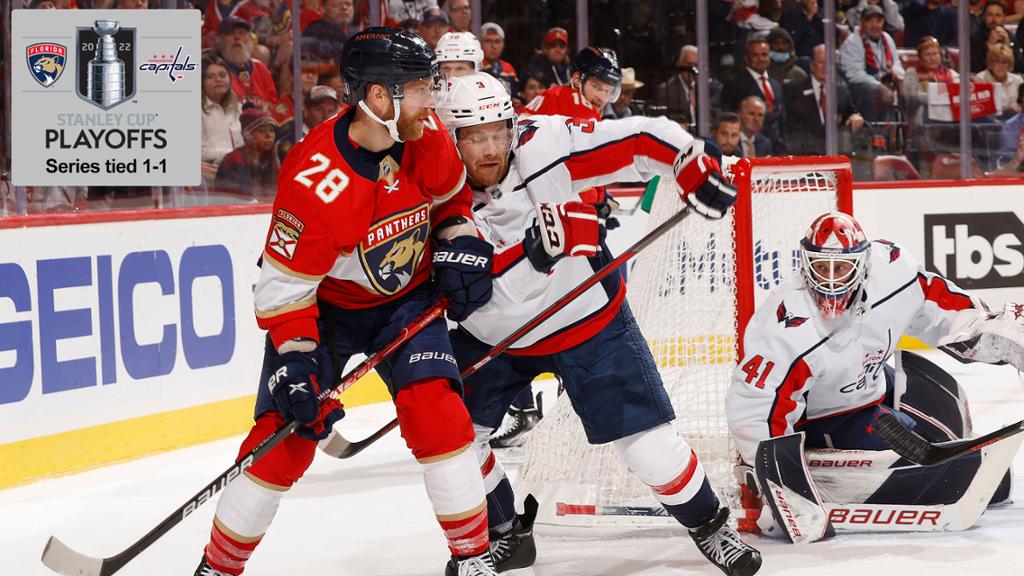 The Washington Capitals will switch to Ilya Samsonov from Vitek Vanecek as their starting goalie for Game 3 of the Eastern Conference First Round against the Florida Panthers at Capital One Arena on Saturday.

Vanecek played well and made 30 saves in the Capitals’ 4-2 victory in Game 1 on Tuesday, but was pulled after allowing five goals on 19 shots, including three goals on the first seven, in the first two periods of the Panthers’ 5-1 win in Game 2 on Thursday.

Samsonov stopped all 17 shots he faced in the third period, opening the door for coach Peter Laviolette to make a change.

“We’re just working through the game from last night and we’re going to evaluate everything, the way the game was played and what we need in the lineup and what we’ll do, and certainly goaltending is a part of that,” Laviolette said Friday.

Inconsistency was an issue throughout the regular season for both Vanecek, who was 20-12-6 with a 2.67 goals-against average, .908 save percentage and four shutouts in 42 games (39 starts), and Samsonov, who was 23-12-5 with a 3.02 GAA, .896 save percentage and three shutouts in 44 games (39 starts). Laviolette chose Vanecek to start Game 1 against Florida but acknowledged it was a close call.

“I think both goaltenders have had points in the year where they were really good,” Laviolette said before Game 1. “Vitek’s body of work has been just a little bit stronger.”

Laviolette might also make a change among his forwards without Tom Wilson, who will miss his second straight game with a lower-body injury and remains day to day. With Wilson out, rookie Brett Leason made his Stanley Cup Playoff debut Thursday on the fourth line with Johan Larsson and Nic Dowd, and Garnet Hathaway moved up to the third line with Anthony Mantha and Lars Eller.

“We’ll make those decisions today on the way home and we’ll be ready for tomorrow,” Laviolette said Friday. “It would’ve been great if you could’ve just moved from Game 1 to Game 2 and had the same lineup, but that opportunity wasn’t here and it wasn’t present, so we need to move forward.”

Here are three keys for Game 3:

Like the Capitals, the Panthers are comfortable away from home. Florida’s 54 road points (24-11-6) during the regular season were tied with the Carolina Hurricanes and the Calgary Flames for second in the NHL, behind Washington’s 56 (25-10-6).

The Panthers hope to continue that success in Game 3, and the Capitals want to bring their winning road formula to Capital One Arena, where they were 19-16-6 during the regular season.

“I think coming in on the road we’ve just got to play a good road game, just solid defensively and keep pucks out of our end and behind their [defensemen], and just play a solid road game,” Panthers forward Mason Marchment said.

2. Back to bottling up Panthers

The Capitals were successful containing the Panthers’ speed and offensive skill for most of Game 1 and at the start of Game 2 with their forecheck and structure through the neutral zone. But Florida eventually broke through in Game 2 with five players scoring a goal and 12 with at least one point, led by forwards Aleksander Barkov and Carter Verhaeghe, who each had a goal and an assist.

The Capitals’ challenge for Game 3 will be to bottle the Panthers up again after they gained confidence offensively Thursday.

“When we’ve played the way that we wanted to and we’ve been in the games, we’ve controlled what we want to control,” Capitals forward Marcus Johansson said. “We’ll take that with us for sure.”

Capitals forward Alex Ovechkin had two assists and a Washington-high nine shots on goal in the first two games of the series but hasn’t scored a goal after finishing fourth in the NHL during the regular season with 50. Ovechkin has been involved physically, with 10 hits in the first two games, after missing the final three regular-season games with an upper-body injury.

But Washington has scored two even-strength goals in the series, so a goal or two from Ovechkin would help.

“You don’t shut him down,” Panthers coach Andrew Brunette said. “You just try to contain him, and I think we’ve done a pretty good job of it. I don’t know if he’s at 100 percent or not, but we know he gets amped up to play at home and tomorrow will be a different day.”

Wilson, a forward, will miss his second straight game and is day to day and . … Shepard, a goalie, was recalled from Hershey of the American Hockey League on Saturday. … Laviolette said there could be other lineup changes. … The Panthers will use the same lineup from Game 2.