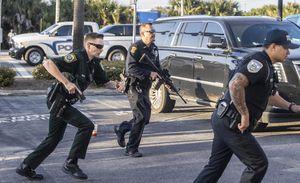 Fortuna Police DepartmentThree Oklahoma sisters were sentenced to federal prison this week for an interstate murder plot that involved “disguises” and “climbing rope” but ultimately failed spectacularly.FBI Special Agent Johnnie Sharp Jr. and the Northern District of Alabama U.S. Attorney Prim Escalona announced Friday that Tierzah Maspeh, 29, was convicted for crimes including conspiracy to commit interstate stalking, discharging a firearm in furtherance of a crime of violence, and multiple cou

Lock, Stock and BarrelThe owner of a Georgia gun range, his wife, and their 19-year-old grandson were murdered on Friday at the facility in what appears to be a robbery.And in a shocking twist, the bodies were found by the teen’s father, who is the county coroner.Grantville Police reported that 40 weapons and a security camera recorder were taken from Lock, Stock and Barrel—which is about an hour southwest of Atlanta.Cops say the federal Bureau of Alcohol, Tobacco, and Firearms was called in to

In January 2019, actor Jussie Smollett told police in Chicago that he had been the victim of a hate crime. The actor claimed that two men shouted slurs at him, dumped a chemical substance on him, and tied a noose around his neck. In February 2019, police charged Smollett with filing a false police report, alleging that he had staged the assault. Smollett vehemently denied the allegations. Then in March 2019, all charges against Smollett were dropped after he agreed to forfeit a $10,000 bond payment and carry out community service. In February 2020, a special prosecutor assigned to investigate how the case was handled, charged Smollett with six new counts of lying to police. Jussie Smollett was convicted in December 2021 on five counts of felony disorderly conduct. In March 2022, he was sentenced to 150 days in jail, 30 months probation, and ordered to pay restitution to the city of Chicago. After spending six days behind bars, an appeals court ordered him to be released after posting a personal recognizance bond of $150,000. Legal analyst and professor Laura Rene McNeal says she thinks that because the Chicago P.D. spent time and resources looking into false claims when they could have been investigating actual criminal activity, Smollett’s sentence was too light. “I thought, because of the resources that were used, and the fact that he used his public figure status, [it] really was egregious,” she says. McNeal also says she believes that Smollett’s actions could hurt the real victims of hate crimes in the future. On Monday’s episode, “The Sentencing Of Jussie Smollett: Justified?” Dr. Phil talks to a panel of legal and civil rights experts about the actor’s conviction and sentencing, his upcoming appeal, and the potentially far-reaching implications of the case. And later, Scott Rouse, Chase Hughes, Greg Hartley, and Mark Bowden, also known as The Behavior Panel, weigh in on Smollett’s body language in court. Then, in the second half of Monday’s episode, “The Oscar Slap: The Aftermath Of Explosive Anger,” Dr. Phil and his guests explore what happened the night actor Will Smith slapped comedian Chris Rock during the Academy Awards broadcast. Check your local listing for air times. WATCH: Dr. Phil Reveals What Bothers Him About The Will Smith, Chris Rock Oscar Night Slap TELL DR. PHIL YOUR STORY: Are you involved in a story making headlines?