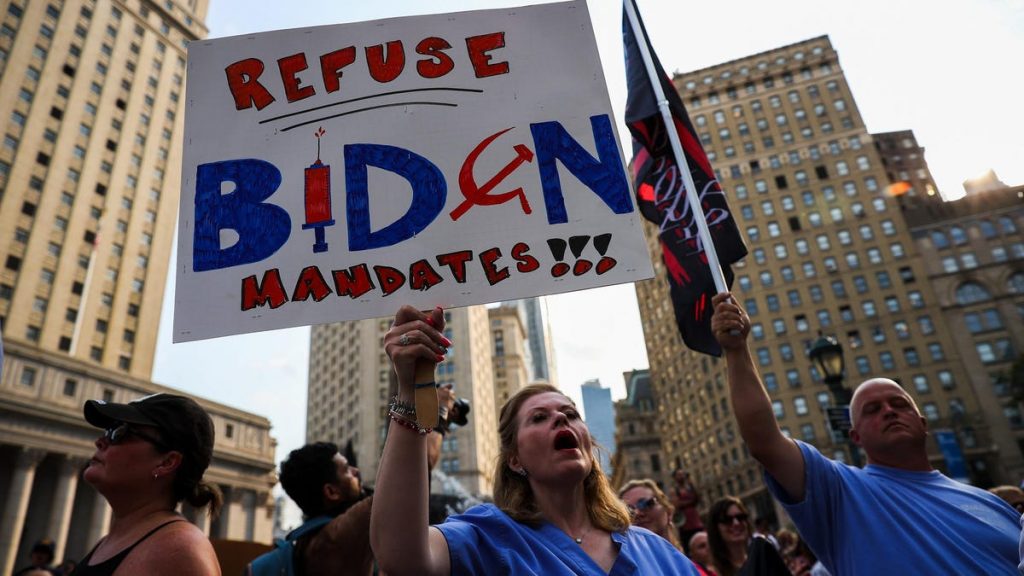 Attorneys general from 10 states sued the Biden administration in federal court Friday over its order requiring federal contractors to get vaccinated for Covid-19, one day after Florida separately sued the administration, part of a broader opposition by Republican-led states to the federal government’s vaccine mandates for workers.

The lawsuit alleges the vaccine requirement violates federal procurement laws, the 10th Amendment, the separation of powers and the Administrative Procedure Act, arguing the mandate is “unconstitutional, unlawful, and unwise.”

The AGs challenge the “sweeping breadth” of the mandate, which they note applies to employees at a workplace that has a federal contract even if their own work is “wholly unrelated.”

The complaint also alleges the vaccine requirement “directly infringes the State’s sovereign authority” because it affects state agencies and departments that also have federal contracts, and will “inflict direct injury” on the states through things like the cost of enforcing the mandate and “[making]
it harder to retain and attract employees.”

A spokesperson for the White House’s Office of Management and Budget defended the vaccine mandate to Forbes, saying in a statement the “Department of Justice and Equal Employment Opportunity Commission have already determined that Covid vaccines can be mandated by employers.”

“If the federal government attempts to unconstitutionally exert its will and force federal contractors to mandate vaccinations, the workforce and businesses could be decimated, further exacerbating the supply chain and workforce crises,” Missouri Attorney General Eric Schmitt said in a statement Friday. “The federal government should not be mandating vaccinations, and that’s why we filed suit today – to halt this illegal, unconstitutional action.”

“This is a once in a generation pandemic that has taken the lives of more than 700,000 Americans, and the President has committed to pulling every lever possible to save lives and stop the spread of the virus,” an OMB spokesperson said in a statement to Forbes. “Vaccine requirements work: they’re good for workers, good for the economy, and good for the country. The President has authority to promote efficiency in federal contracting in this way.”

Approximately one-fifth. That’s how much of the U.S. workforce is made up of workers employed by federal contractors, according to the U.S. Department of Labor.

The White House has set a deadline of December 8 for federal contractors to be vaccinated, though Biden administration officials have said there’s some flexibility to that date in terms of employers taking action against unvaccinated workers.

Though all of the 10 states are led by Republicans, Iowa Attorney General Tom Miller, who joined the lawsuit, is a Democrat.

Biden enacted the vaccine mandate for federal contractors in September, along with vaccine requirements for federal employees and healthcare workers at facilities receiving federal funds. The administration also imposed a vaccine-or-test mandate for all employers that have more than 100 employees. Those mandates, designed to combat continued vaccine hesitancy and persuade workers to get the shot, have become a matter of fierce partisan controversy, with Republicans decrying the measures as illegal infringements on people’s personal liberties. Arizona was the first state to take legal action against the administration’s mandates in September, and Florida filed its own lawsuit targeting the contractor mandate on Thursday before the multi-state complaint on Friday. Governors and state lawmakers have also taken other steps to try and combat the federal government’s vaccine requirements, such as executive orders banning private employer mandates or allowing state employees to be exempt from the vaccine requirements.

Though Republican officials have vehemently opposed Biden’s vaccine mandates, polling shows they’re actually popular with a majority of Americans, with a September Gallup poll finding approximately 60% of respondents backed the federal measures. Many companies that have already imposed mandates have also reported a high level of compliance, suggesting the requirements are achieving their stated goal of encouraging more people to get vaccinated.