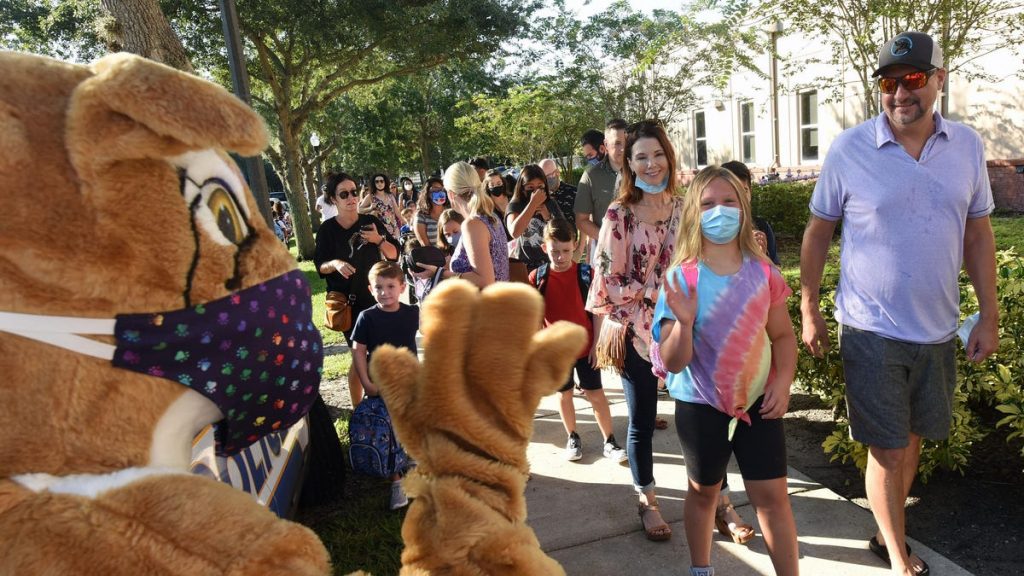 Ten school districts in Florida—including those covering most of the state’s largest cities—now have mask mandates in place after two more districts approved masks Tuesday night, as schools continue to revolt against Florida’s ban on mask orders even as state officials punish those who do.

The counties join Broward, Alachua, Duval, Hillsborough, Leon, Miami-Dade, Sarasota and Palm Beach counties in implementing mask mandates that go against the state policy by not offering a way for parents to opt their children out of them.

A Washington Post analysis Wednesday found more than half the students in Florida—52%—are now under a strict mask mandate, as the mandates cover most major Florida cities including Miami, Palm Beach, Tampa, Jacksonville, Tallahassee, Orlando and Sarasota.

Broward and Alachua counties were the first to adopt the mandates, prompting the Florida State Board of Education to sanction those districts on August 17.

The other eight counties have all imposed mandates in the past week after the initial two counties had already been sanctioned, despite the likelihood of them being punished as well.

Indian River is now the second county that voted for former President Donald Trump in the 2020 election to impose a mandate, along with Sarasota County.

54%. That’s the percentage of Florida adults that believe schools should be allowed to mandate masks instead of leaving it up to parents to decide if their child wears a mask, according to a Quinnipiac poll conducted August 17-21. A larger majority, 60%, more generally supported students, teachers and staff being required to wear masks in school.

The state is expected to punish Broward and Alachua counties for their mask mandates in the coming days by revoking an amount of funding equivalent to their school board members’ salaries. The state gave the counties an ultimatum that they would withhold the funding if they didn’t drop their mask mandate by Tuesday, which both counties have refused to do. The rash of counties that have followed in their footsteps are likely to face consequences as well, with Christina Pushaw, spokesperson for Gov. Ron DeSantis, telling Forbes in an email last week school board members “found to be in violation of state law will face consequences.” A three-day hearing in one of the lawsuits challenging the state policy is also scheduled to wrap up on Wednesday, which could potentially result in the policy being struck down entirely.

Not all Florida counties have been willing to flout the state guidelines. Pinellas County voted against holding a special meeting to reconsider its mask policy on Tuesday, for instance, and school boards in Polk and Manatee counties have similarly left mask guidelines that are in line with the state in place.

Florida is one of at least nine states that has enacted policies that prohibit school districts from imposing mask mandates, which have been highly controversial as a new school year begins amid the spread of the highly transmissible delta variant. Florida’s ban, which DeSantis imposed in July, has proved particularly contentious as the state has faced a massive Covid surge. The state’s Covid-19 outbreak has already had a huge effect on schools just a few weeks into the school year, sending thousands into quarantine and already forcing some schools back to virtual learning at least temporarily. The White House has backed the schools who have imposed mask mandate bans despite the state policies against them, saying they can use federal funding to replace any state funds that are withheld and vowing to investigate and potentially take action against states that have school mask mandate bans in place.